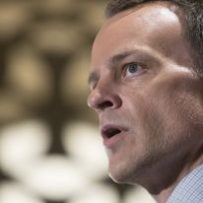 On Sept. 12, the first full day of the election campaign, Evan Siddall, president and chief executive of Canada Mortgage and Housing Corp., downed his sword.

“For anyone calling for my reactions, it is inappropriate for me to offer comments on policy during an election campaign,” Siddall tweeted on the day the Liberals offered their contribution to what would become a potluck of housing sops. “As a civil servant, I have a duty to remain impartial to the democratic process.”

That was great news for the real-estate lobby, with which Siddall, a former investment banker, has duelled repeatedly since accepting his current assignment in 2014. It had an open field to urge politicians to solve the affordability crisis by making it easier for the least creditworthy borrowers to get bigger mortgages. “We are glad to see the parties are listening,” Kevin Lee, the president of the Canadian Home Builders’ Association, said in a press release in September.

Now that the democratic process is over, Siddall has picked up his sword.

This glorification of homeownership is this odd North American thing that’s counterproductive economically and socially,

“I don’t know why this debate is still happening,” he told me in an interview at CMHC headquarters in Ottawa this week. “And I don’t know why people are vulnerable to it because it’s just obvious that if you push prices higher, you’re going to make the (affordability) problem worse.”

Siddall, who was appointed by Stephen Harper’s government, has been called “arrogant” by Conservatives for describing in blunt terms that subsidizing debt helps builders and brokers, not buyers.

Incentives such as the provision that allows first-time purchasers to withdraw from their Registered Retirement Savings Plans, the capital-gains-tax exemption on home sales, and reduced property-tax rates stoke demand and price inflation because so many urban markets are supply-constrained.

Under Siddall, CMHC has taken a step back, as per his mantra of using the agency’s resources to support “needs,” not “wants.” According to the 2018 annual report, it had insured about 29 per cent of outstanding residential mortgages, compared with about 43 per cent in 2014. Siddall’s priority these days is financing rental units, not juicing home-ownership rates.

“This glorification of homeownership is this odd North American thing that’s counterproductive economically and socially,” he said. “If you are an owner versus a renter, (society) neglect(s) you,” Siddall added.

“You are 75 times more likely to have severe food-insecurity issues if you are renter versus an owner. Part of that is because you have less income. That’s why you’re renting. But it is also because housing itself is contributing to this increasing division between rich and poor.”

And yet here we are again, on the verge of a new round of incentives that could offset some of that good work.

The Conservatives and the New Democratic Party both promised to increase the maximum amortization period for first-time homebuyers to 30 years from 25, which would lower monthly payments, but saddle borrowers with more debt.

Finance Minister Bill Morneau used his pre-election budget to increase the amount that first-time buyers can pull from their RRSPs for a downpayment. He also introduced a shared-equity scheme that allows some first-time buyers to work with CMHC as a co-investor, which at least allows individuals and families who insist on chasing runaway home prices to do so without exceeding reasonable debt loads. At the start of the campaign, Trudeau said he would adjust the program so more people from the most expensive cities could qualify.

Siddall is untroubled by the original co-investment plan. He said on Twitter this week that CMHC had committed about $40 million to 2,000 applicants so far. In the interview, Siddall said he reckons the program’s inflationary effects will add only about $114 to the price of a home. He characterized it as a reasonable political response to the minority of creditworthy borrowers blocked by the stress test.

But honestly, this stuff has to stop.

The real-estate industry is getting all the help it needs from the drop in mortgage rates that followed the U.S. Federal Reserve’s decision to cut its benchmark rate this year. Yet it still advocates for “tweaks” to the measures the federal government put in place to stop the credit binge, and too many politicians continue to treat the housing lobby as if its members are the buyers, not the builders and brokers who are enriched by bubbly markets.

Siddall offered a preview of some CMHC research on what would happen if Parliament enacted all of the proposals from the campaign. The calculation includes an enhanced shared-equity program; an easier stress test that reduces the interest rate that borrowers must show they could afford by a percentage point; and the longer amortization period. Assuming a response rate of 100 per cent, average prices would rise by as much as $16,000, said Siddall.

“These aren’t tweaks,” Siddall said. “These are real numbers.”