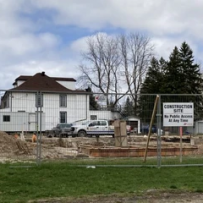 Owen Sound is conditionally waiving just over $212,000 in development fees for two projects that will add a combined 39 rental units in the city.

Some councillors said Monday that the two developments – a 23-unit build near Duncan McLellan Park and 16-unit townhouse project on 16th Avenue East – are exactly what council had in mind when it approved a fee exemption for purpose-built rental units as a way to increase that type of much-needed housing.

“As we are all aware, more supply is going to be better for this community,” said Coun. Travis Dodd.

He said he’s concerned the city is exempting the fees – intended to fund growth-related expenses so the entire cost isn’t borne by existing taxpayers or water/sewer users – on builds that do contain rental units, but with monthly rates that could be set at $2,000 or more.

“If you had a new building at $2,000-plus a month, is waiving the development charges for those tenants and that developer the right thing to do if it means the widower on 5th Avenue West in the 1800 block is going to be footing that bill ultimately?” Greig said.

“I’m wondering if we’re starting now to see the intent is swaying a little bit.”

He said perhaps council should discuss soon how to alter the exemption to encourage affordable rental units.

Corporate services director Kate Allan said the affordability aspect was brought up when council discussed the eligibility criteria for the purpose-built rental exemption.

As it is now, the fees are waived when a building permit is issued and an agreement is registered on title requiring the owner to maintain the units as rentals for 20 years. The development fees would have to be paid if the owner alters the units to life-lease, freehold or condominiums in that time.

It would not be feasible, she said, for staff to monitor the rental rates for the units during that 20-year period to ensure they remain affordable or at market rates.

The city also doesn’t have a model for ensuring rent is geared to a person’s income, she said.

“I can certainly reach out to our consultant to see if they are seeing this applied in that way, but I can’t imagine how you would hold these agreements over the life of the term and guarantee that type of clause,” she said.

Coun. Richard Thomas said council didn’t put any conditions on the exemption because the goal was to encourage any rental housing.

He said Owen Sound’s upper-tier municipality – Grey County – has approved a plan to add affordable housing units by increasing the county’s tax levy by one per cent annually and dedicating the funds solely to support those projects.

Dodd said the city’s exemption is intended to create more rental housing supply, which, eventually, will result in more affordable options in the rental market as supply meets or exceeds demand.

Projects that can receive the exemption must contain four or more rental units, which must remain as rentals for 20 years.

The first was for Grey Bruce Living Ltd., which is constructing The Douglas – a 23-unit rental housing development at 1723 8th Ave. E., which was the site of the M’Wikwedong Indigenous Friendship Centre before it moved to the former Dufferin school building.

Michael Guindon of Grey Bruce Living Ltd. said the footings for the building have been poured and he’s hoping construction will wrap up in about 10 months.

Each unit will have two bedrooms and the development will be geared to the 55-plus market, he said.

The other development fee exemption agreement is with AndPet Realty, which is building four, four-unit rental townhouse units at 1458 14th St. E. as part of its East Court Residences development.

AndPet’s build is exempt from $99,568 in development fees.