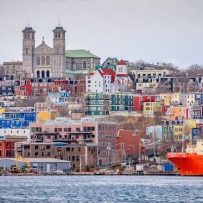 The City of St. John’s could be facing an uphill battle in its quest to create more affordable housing.

The results of a survey of 249 landlords and property managers, conducted online between May 9 and June 3, suggest just less than half of the people who responded are interested in providing affordable housing in the city.

Citing damages, lost rent and rising costs, most respondents listed people on income support at No. 2 on their list of who they’re cautious about renting to. People with pets were No. 1, and students were No. 3.

“There certainly is, I think, a good deal of stigma around lower-income folks, unfortunately, that exists within the community,” said Ward 2 councillor Ophelia Ravencroft.

“It’s not always an easy thing to break down,” she said. “The minute that some folks hear that income support is in the mix they tend to throw their hands up and say, ‘OK, well, you know, how can I be sure that you can pay this?'”

But Ravencroft said there is some hope in the survey: 47 per cent of respondents were interested in providing affordable rents, versus 53 who said they weren’t.

Rental costs in St. John’s are rising, and the rental market is competitive to the point of being dire.

Meanwhile, the city is struggling to get more affordable housing — defined as rent that costs less than 30 per cent of a household’s pre-tax income — at the same time renters and landlords are dealing with a rising cost of living.

“The economics of it are really difficult … for landlords to want to provide affordable housing,” he said.

The survey isn’t representative of the whole city — most of the respondents were small-scale landlords, operating between one and five units, mostly basement apartments or single-detached homes and most of those in central, eastern and western St. John’s. Few of them had properties downtown, in Shea Heights or in Mount Pearl.

It does indicate landlords felt — among other things — that there’s not enough security for them to recoup the cost of missed rent or damages. They also said there aren’t agreements for housing subsidies to ensure long-term or consistent tenancy, and a lack of support for complex tenants.

When asked what would make it more appealing to invest in affordable housing, the No. 1 answer was a fund to help them recoup the costs of lost rent or damage. Tax breaks and rental top-ups were listed second and third, followed by more money to help make units more accessible and energy-efficient, and more subsidies attached to rental units as opposed to tenants.

Pawson said End Homelessness St. John’s has a program that can help with some of those costs.

The program, called HomeConnect, provides landlords guarantees, and the money to pay for missed rent or damages, said Pawson.

“We rarely ever need it, and that’s really there to offset perceived risk to renting to somebody who’s a low-income earner, somebody in our case who may be leaving, exiting homelessness and into housing,” he said.

“Those little things, those little assurances can make a big difference even if it’s only just overcoming perception,” said Pawson.