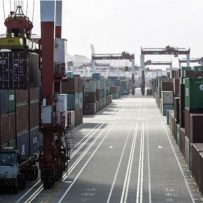 China’s exports unexpectedly contracted in August, with sales to the U.S. tumbling amid the escalating trade war between the two nations.

Exports decreased one per cent in dollar terms from a year earlier, while imports declined 5.6 per cent, leaving a trade surplus of US$34.84 billion, the customs administration said Sunday. Economists had forecast that exports would grow 2.2 per cent, while imports would shrink by 6.4 per cent. Shipments to the U.S. fell 16 per cent from a year earlier.

President Donald Trump’s administration raised tariffs on Chinese goods at the start of the month, and is set to ratchet up levies further in October and again in December if there is no breakthrough. China and the U.S. will hold face-to-face trade negotiations in Washington in the coming weeks, after a rapid deterioration in relations last month left global investors reeling amid increasing evidence the conflict is harming both nations.

“It’s bad on all fronts,” said Michael Every, head of Asia financial markets research at Rabobank in Hong Kong. “Add in the inevitable fall-off when U.S. shipments finally catch up with 15 per cent and 30 per cent tariffs, and it’s an ugly picture.”

Weak exports add pressure on China’s already-slowing economy and point to an increased need for its policy makers to beef up stimulus measures. The central bank said Friday it will cut the amount of cash banks must hold as reserves to the lowest level since 2007, injecting liquidity into the economy with the goal of stimulating demand.

“The optimism from easing policies announced on Friday may be partially offset by the weak trade data as the economy still faces larger downward pressures,” said Peiqian Liu, a China economist at NatWest Markets in Singapore. She sees the yuan between 7.05 and 7.25 per dollar in the near term.

The contraction came despite a persistent weakening of the yuan, and is evidence that exporters are not “front-loading” sales to try to beat oncoming higher tariffs. China has allowed the yuan to decline below 7 a dollar, prompting the U.S. to name it a currency manipulator. China’s August trade surplus against the U.S. was US$26.95 billion.

The latest escalation of 5 percentage point higher tariffs on almost all Chinese goods will lead to another 0.3 percentage point drag on China’s gross domestic product growth over a 12-month period, Wang Tao, chief China economist at UBS AG, wrote in a note. That’s on top of the bank’s previous downgrade of economic growth expectations in 2020 to 5.8 per cent.

“We continue to expect no trade deal in 2019 and even 2020 in our base case, and see the risk of further trade war escalation,” she said.