China swoops in on Canadian oil that’s US$50 cheaper than U.S. crude 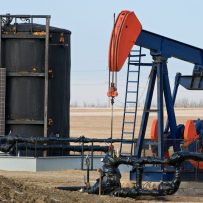 Chinese oil buyers are making a beeline for a bargain across the Pacific.

With Canadian oil over 60 per cent cheaper than U.S. benchmark West Texas Intermediate and global marker Brent, China’s refiners are being lured to the heavy, sludgy crude. That’s because — apart from being a source of fuel — it’s rich in bitumen, a black residue used to build everything from roads to runways and roofs.

China’s demand for the material is expected to increase as President Xi Jinping’s government focuses on infrastructure construction in a bid to reform the world’s second-biggest economy. With the availability of other bitumen-yielding oil varieties such as Venezuela’s Merey shrinking, the Asian nation’s refiners are turning to alternative supplies to feed the building boom at home.

One of their options is Canadian crude, prices for which are tumbling as rising production runs into pipeline bottlenecks and maintenance work cuts refinery capacity at regular buyers in the U.S. Midwest. In the rest of the world, oil is surging as impending American sanctions squeeze Iranian exports and an economic crisis hits Venezuelan shipments. Fears are rising that OPEC will struggle to ease a looming supply crunch.

“The policy of boosting infrastructure investment has been bullish for bitumen,” said Li Haining, an analyst with industry consultant SCI99 in China’s Shandong province. “The supply of the Merey grade has been disrupted since May, pushing refiners to look elsewhere. As late-September and October is traditionally the peak season for construction projects in China, demand will be further supported.”

China bought 1.58 million barrels of Canadian crude for loading in September, almost 50 per cent higher than the 1.05 million barrels in April, data from cargo-tracking and intelligence company Kpler show. State-run refiner Cnooc Ltd. has chartered a tanker, Nordtulip, to load oil from Vancouver in October, according to shipping fixtures.

With Chinese infrastructure spending in the second half of 2018 seen accelerating at five times the pace in the first six months of the year, expectations that bitumen demand will increase have boosted prices of the material to a record in the nation. That means refiners producing the residue from relatively cheap Canadian oil would enjoy better profit margins.

The heavy Western Canadian Select crude grade’s discount to U.S. WTI was said to have expanded to US$50 on Wednesday. The absolute price of WCS was near US$26 a barrel. On Thursday, Brent crude — the benchmark for more than half the world’s oil — was trading at US$81.48 a barrel at 11:29 a.m. in London.

Apart from Canada, China has also turned to producers such as Brazil for alternatives, said WengInn Chin, a senior oil market analyst at industry consultant FGE in Singapore. Demand for heavy crude is particularly high among the Asian nation’s independent refiners, known as teapots. The Kpler data shows that the Canadian shipments to China are being delivered to northeast ports including Qingdao and Yantai, which serve these processors.

As the teapots face competition from new mega refineries and increased regulatory scrutiny, they are exploring strategies to stay profitable. Given that the companies have historically been adept at processing heavy crude or residual fuel oil, they could be well-positioned to capitalize on the demand for bitumen and cheaper Canadian oil, according a Bloomberg survey of three traders who participate in the market.

“On the demand side, there are expectations for bitumen growth in China due to a boost in infrastructure spending, ” said Sophie Shi, a Beijing-based analyst with industry consultant IHS Markit. “With traditional heavy oil shipments shrinking globally, trade flows are being reshaped and alternative heavy oil supplies from countries such as Canada are becoming sought after.”