China promises U.S. that it will not manipulate its currency as sides near deal 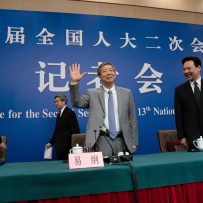 A pending trade agreement between the United States and China could put few restrictions on Beijing’s control over the strength of its currency, potentially inflaming trade hawks in Congress and within the Trump administration itself.

China’s control over the value of its currency has long been a major point of conflict between Beijing and the West, though the issue has faded in prominence in recent years. Lawmakers and officials in other countries have contended that Beijing has unfairly weakened China’s currency, the renminbi, compared with the American dollar and other currencies, giving Chinese companies and factories an advantage when selling goods abroad.

China has long denied the accusation.

Yi Gang, the governor of China’s central bank, said at a news conference on Sunday morning in Beijing that during high-level trade talks last month in Washington, “the two sides reached consensus on many key and important issues” about currency markets.

American officials have taken varying stances on the currency provisions. President Trump and Treasury Secretary Steven Mnuchin have expressed satisfaction with them. But Robert E. Lighthizer, the United States trade representative, cautioned Congress in testimony two weeks ago that nothing was fully resolved in the trade negotiations until everything had been settled.

Though the issue has ebbed as China’s currency has strengthened in recent years, the trade war has given it new relevance. The renminbi fell 10 percent against the American dollar between February and October last year, to the intense annoyance of trade hawks in the Trump administration.

But the renminbi’s fall corresponded to a credit crunch in China and the precipitous slowing of the Chinese economy. Chinese officials contend that the renminbi’s fall reflected the strength of the dollar, not currency manipulation on their part. Miao Yanliang, the chief economist at the Chinese central bank, the People’s Bank of China, noted in a recent statement that the euro fell against the dollar at about the same pace as the renminbi from February to October last year, while the British pound fell even faster.

Since the end of October, the renminbi has recovered nearly half its losses during last year’s slide. Foreign investors have poured money into China’s stock market and bond market. They hope to profit from China’s recent program of extra government spending and tax cuts, now being enacted to offset the economic slowdown.

The currency provisions of the evolving trade agreement are essentially a reaffirmation of the statement that the G-20 economies, including China, issued when the group’s finance ministers gathered in Shanghai in February 2016.

In the Shanghai currency accord, all the group’s finance ministers agreed that they would not deliberately devalue their currencies with the purpose of achieving a competitive advantage for their exports. When a country’s currency falls in value, that makes the country’s exports less expensive and more competitive in foreign countries.

But the Shanghai currency accord, like the currency provisions in the Sino-American trade agreement now being negotiated, still allowed currencies to move up and down for lots of other reasons. These reasons include differences in interest rates and varying investment flows, as well as trade surpluses and deficits.

China has long contended that these variables determine what happens to the value of its currency, and that it does not deliberately undervalue its currency to help exporters.

Beijing argues that it is fairer to measure the renminbi’s value against a so-called basket of currencies of its trading partners, and not just against the dollar.

The Shanghai currency accord also required G-20 finance ministers to notify each other of major changes in currency policy, and to disclose data in compliance with I.M.F. standards.

In August 2015, China unexpectedly devalued its currency with no warning and very little explanation. It then quietly let the currency slide further from December 2015 through early January 2016.

Japan had pushed hard for the Shanghai accord because of Japanese exporters’ alarm over the Chinese devaluation.

That devaluation helped China’s exporters a little, but it came at a very high cost to Beijing. Once the renminbi started sliding, it proved very hard to stop. The central bank ended up spending $1 trillion of its $4 trillion in foreign exchange reserves to stabilize the currency.

Mr. Yi said on Sunday that the central bank now had a target of maintaining foreign exchange reserves of at least $3 trillion. The reserves have fluctuated at about that level for the past three years and totaled $3.09 trillion in February.

That leaves very little room for the Chinese central bank to intervene again in currency markets without falling below the threshold set by Mr. Yi.

The accusation by American officials that China manipulates its currency is based on a period from early 2001 to the summer of 2014 when the Chinese central bank did sell renminbi and buy dollars on a massive scale to keep the renminbi weak and help exporters.

China’s foreign reserves ballooned 24 fold in that period, rising to $4 trillion from $166 billion and dwarfing every other country’s reserves.

But since then, Chinese officials have struggled to prevent the renminbi from falling. As the Chinese economy has slowed, many Chinese companies and families have looked for ways to send money out of the country, potentially destabilizing not just the renminbi, but also the Chinese financial system.

Beijing has responded since 2016 with increasingly draconian restrictions on capital movements. Using the formidable investigative and surveillance capabilities of the Chinese police, the government has jailed people involved in surreptitious movements of cash abroad.

The crackdown has almost completely halted what had been a flood of Chinese money into American real estate and even European soccer clubs in 2015 and early 2016. China now approves few overseas acquisitions by its companies except in areas where it could acquire a geopolitical or military advantage, such as aircraft production, heavy manufacturing, cybersecurity and artificial intelligence.

Mr. Yi spoke on Sunday at the annual news conference of the central bank’s leadership, held in conjunction with the 11-day session of the National People’s Congress.