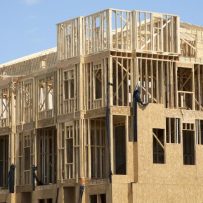 The Grande Prairie and District Chamber of Commerce has presented a potential plan to the City of Grande Prairie which could help provide more affordable housing opportunities to those in need. During Tuesday’s Protective and Social Services Committee Meeting, the Chamber proposed creating a Public-Private Partnership that would see the City invest in private industries and lease out rental units.The plan, as proposed, would have the City pay an advanced monetary sum, and then enter into either a 10 or 20 year lease for up to 30 per cent of the total number of suites in an apartment building. The City’s lease agreement would be equivalent to an affordable rental rate, which is 10 per cent below the market rate.

In this plan, the property would not be tax exempt, which would help to recoup any investment made into the plan.

“The original consultations that the City did with the stakeholders back before the strategy came out, suggested that [the City] would be the owners of the property and look after the affordable housing aspect that way,” says Larry Gibson, Chair of the Chamber. “With that of course, if it’s City-owned or Government-owned property, there’s no property tax paid to the City, so it in fact cuts into the revenues that the City can generate through private owned buildings in the community.”Gibson adds that the property taxes help make the model more feasible. The Chamber proposed in their presentation an investment of $10-million towards this plan, and compared it to the concept of a City-owned building at the same price. Through this partnership, $10-million would be able to provide 157 affordable units, and be paid off within 12 years. Whereas, with a City-owned building, the same $10-million would only cover 54 units, and take over 16 years to recoup.A City-owned building would also be designated solely to affordable housing, while a privately-owned building would be able to provide more units for other Grande Prairie residents. Though the City would own the building and be able to possibly use it for future projects, or sell it at a later date, they would also have to compete directly with the private sector.

These units would not be meant to address the issue of supportive housing, such as for those struggling with substance abuse or who require treatment for mental illness, but instead be supplied to those who fall under the Core Housing Needs category, which is set out by the Canadian Mortgage and Housing Corporation.

“There’s a lot of criteria (for Core Housing Needs), and I don’t think you have to check all the boxes, but the main one being that you fall into that category if you are paying more than 30 per cent of your gross income towards your housing costs,” says Dan Wong with the Chamber.

“There are other criteria, such as the state of repair of your housing, and whether or not you have the right number of bedrooms to manage the size of your household. But the main one is the financial concern, that probably around 11 per cent of households in Grande Prairie (based on figures from 2016) are paying more than they should for it to be affordable for them.”

During the presentation, City Council members did voice concerns about being in charge of filling and maintaining these units, but Gibson points out that they could employ an existing social housing management agency like the Grande Spirit Foundation, which already manage other properties for the City, to manage these units.

Affordable housing is something the developers in Grande Prairie are trying to work towards doing more of, but the current incentive programs from the Canadian Mortgage and Housing Corporation are still not enough, and further incentives have been sought for a while.

“The discussions that I’ve had with developers is that this would be just enough incentives to get their projects going,” says Wong. “And a few of them that I’ve talked to [say] they are sizeable projects that would really put a dent into the affordable housing needs.”

Wong adds that this partnership would create a win-win situation, where more people could get into a more affordable living space, while also creating the opportunity for more building to be done. Not only could this partnership lead to more people getting back to work and helping grow the economy, but it could also lead to a growth in the rental supply, which would help other Grande Prairie residents find rental opportunities as well.

The City Committee accepted the proposal for information, and has directed staff to review the plan and report back with recommendations at a future date.

Story by: Everything GP