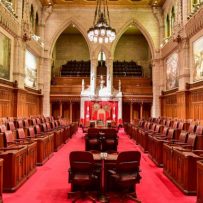 June 7 was the third and final reading for Bill C-45 (aka the Cannabis Act) in the Senate and it was a marathon 6-hour debate session. In the end, Bill C-45 passed 56 to 30, with 1 abstention.

The next step for the bill is back to the House of Commons where the amendments will be reviewed, and if the amendments are accepted, then it will be sent to the Governor-General for Royal Assent, after which it will become law.

If the House of Commons does not accept the amendments or changes the bill, it will be sent back to the Senate for another vote. There is potential for this to go back and forth many times, which could put the July goal for legalization in jeopardy.

What changes did the Senate make to Bill C-45?

Overall, the Senate made 44 amendments to the bill, 29 of which were put forward by Sen. Tony Dean, the bill’s sponsor.Most of these amendments were technical, such as slight changes in wording, but the Senate did make two noteworthy amendments.

One gave provinces and territories the authority to ban home cultivation outright (which Manitoba and Quebec indicated they will do), while the other amendment called for maximum potency limits for THC.

Even today, another amendment was approved.

Sen. Larry W. Smith, the Senate’s Leader of the Opposition, brought up the very important issue of the treatment of Canadians at the border who admit to prior marijuana use and questioned what the federal government is doing to protect Canadians from increased scrutiny once cannabis is legalized.

As it stands, being truthful about cannabis use to American border guards can get you banned from the States for life, and Sen. Smith said that the Canadian government must do something. Canadians should not be punished for doing something that is legal in their country.

Sen. Jaffer aired her concerns about Canadians crossing the border and told how Olympic gold medalist Ross Rebagliatti got a lifetime ban from the USA after admitting to using cannabis on Jay Leno’s show. Ross now has his own cannabis company, called Ross’ Gold.

She called for a sweeping education campaign to educate Canadians about what to expect when crossing the border.

Are health concerns over cannabis overrated?

“The health concerns around cannabis are not as bad as opponents make it seem.

When asked if he thought prescribed medical marijuana is better than prescribing opioids, he said yes because prescribed use of cannabis in certain situations has provided enormous benefits while the impact of opioids has been devastating.

“Cannabis is no worse than alcohol in its effects”.

He pointed out how the social fabric did not unravel with the end of Prohibition and he believes we will see similar effects with Bill C-45, saying

“It is a harm-reduction bill, not a harm-elimination bill.”

Sen. Eggleton said that we should take a public health approach, not criminal law approach and said the biggest problem is the criminalization of marijuana, not marijuana itself.

He also pointed out that as recently as 2016, there were 18,000 Canadians charged with simple cannabis possession.

Did you know Canada is breaking 3 UN Drug Control Conventions?

Sen. Carignan said that Canada will be violating our treaty obligations and the government’s claims that “legalizing cannabis is a domestic response to a domestic issue” are not an excuse to skirt our international obligations.

By legalizing cannabis, Canada will be breaking UN Drug Control Treaties that restrict cannabis to scientific and medical use only.

Sen. Carignan also called out the minimum age for cannabis use. saying that he would prefer 25 years of age to put it in line with scientific studies that show the young brain doesn’t stop developing and he even said cannabis should be kept in a closed and locked compartment,

Sen. Seidman found it “difficult to understand why the government is doing this at all”, saying,

“Legalization should be a last resort”.

She preferred an incremental approach and brought attention to Canada being the second country in the world to legalize cannabis in a negative way.

She said she supports pardons and decriminalization, and fellow Conservative Sen. Beyak said,

“We should stop Bill C-45 and instead decriminalize cannabis immediately.”

Sen. Seidman also challenged the Trudeau government, saying that if this is truly a public health approach and not profit-driven, the government will keep her amendment that banned brand stretching when Bill C-45 goes back through the House of Commons.

In Nunavut, cannabis is $50-100 per gram but Sen. Patterson was still against it

Nunavut Sen. Dennis Patterson said residents pay $50-100 for a gram, but he seems to think that the prohibitively high prices are a good thing, calling cannabis a “mind-numbing drug” and saying that legalizing cannabis “will lead to brain damage and fatalities”. He was especially concerned for Nunavut’s Indigenous communities and the ill effects that cannabis could have on them.