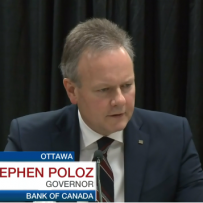 Story by: Barrie McKenna, The Globe and Mail

Bank of Canada Governor Stephen Poloz says Canadians should get used to both a cheap dollar and more inflation as the country continues to grapple with the shock of falling commodity prices.

The Canadian dollar, which has tumbled to near 70 cents (U.S.) last week, is working to offset billions in lost revenue from exports of oil and other commodities, while making non-energy exports more competitive in world markets.

“Movements in exchange rates are helping economies, including ours, make the adjustments that must take place,” Mr. Poloz said in remarks prepared for a speech in Ottawa last Thursday.

The downside is that the cheaper dollar – now down more than 30 per cent from its peak – is making a wide range of imports more expensive, spreading the pain of the oil price shock from the oil patch to the rest of the country, he pointed out.

Mr. Poloz said he’s fully prepared to live with a bit more inflation, which he insisted is mainly temporary. “Core inflation is overstating the underlying trend of inflation in the economy,” he said.

The Bank of Canada doesn’t seem inclined to raise interest rates to quell those inflation pressures. Mr. Poloz said that would cause more damage to the economy.

Indeed, some economists have suggested that the Bank of Canada could cut its key rate for a third time in the past year as early as its next rate-setting announcement later this month.

Most economists don’t expect higher rates in Canada until late this year, or even 2017.

Trying to prop up the Canadian dollar would ultimately mean far more pain for Canadians and delay the adjustment to the reality of low commodity prices, Mr. Poloz said.

“This is exactly why countries choose to have flexible exchange rates,” Mr. Poloz said in a breakfast speech at Ottawa City Hall.

Mr. Poloz pointed out that lower commodity prices are draining $50-billion (Canadian) a year out of the economy every year – $1,500 for every Canadian. This is caused by a combination of lower export revenue and pricier imports of such things as cars, food and electronics.

Mr. Poloz’s vigorous defence of the weaker Canadian dollar comes as the U.S. Federal Reserve has begun to push up its key short-term interest rate. This is putting additional downward pressure on the loonie.

The Fed hiked its benchmark rate for the first time in years in December.

The Bank of Canada is due to make its next rate announcement Jan. 20. The bank will also update its forecasts, and Mr. Poloz suggested these will reflect upward inflation pressures.

“The depreciating currency means higher prices for imported goods and services,” he said. “We’re seeing this in Canada right now.”

Mr. Poloz did acknowledge that a cheaper currency is not a panacea, and that the full benefits for non-energy exporters could take some time.

And Mr. Poloz said governments may need to use fiscal policy and more flexible labour regimes to bolster the positive effects of the weak dollar.

In Ottawa, the Liberal government has promised to boost infrastructure spending to help spur economic growth.

So far, the economic weakness from the oil price shock has been largely confined to Alberta, Saskatchewan and Newfoundland, where unemployment is up sharply and retail sales have taken a hit.