CANADIANS FED UP WITH HOMELESSNESS AND GOVERNMENTS MAKING IT WORSE 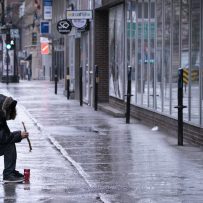 There was a time, not too long ago, when tent cities plagued by violence and disorder were a phenomenon reserved almost exclusive to the most troubled corners of Vancouver or Toronto.
But now, they’re virtually everywhere.

Earlier this year, Calgary was forced to dismantle an encampment in its downtown after it became host to 27 violent attacks in only two months. Parks throughout Halifax are now host to permanent tent cities, with even sympathetic neighbours reporting that they’ve become nightmare hubs of screaming, fights and abandoned needles. Just last month, an RCMP officer was murdered during a routine call to a Burnaby homeless encampment.

And according to a new Leger poll for Postmedia, Canadians are not only done with all of this, but they’re increasingly convinced that their governments are actively making it worse.

And in B.C., that sentiment is almost universal: An incredible 87 per cent of B.C. poll respondents called homelessness a “problem” while 72 per cent said it was causing increased violence.But the most damning figures came when Canadians were asked how their governments were managing the country’s homelessness crisis.

“At some point it’s a bit of a gut check in terms of ‘What are we doing here?’” said Leger’s Andrew Enns. “I think governments need to be cognizant of the fact that, at best, they’re not making a lot of progress on the homelessness issue.”

It’s not for lack of funding. In B.C. alone, the most recent budget earmarked $633 million for spending on homelessness. This included nine-figure funding to implement a “permanent housing plan” for the approximately 3,000 British Columbians who received temporary shelter spaces during the COVID-19 pandemic. With a price tag of $264 million, this works out to about $88,000 per homeless individual.

In Ontario, homelessness spending is expected to hit $446 million for the next fiscal year — and this rises to more than $1 billion when spending on housing is looped in.

And yet, by almost every metric, Canadian homelessness continues to get worse. Even before the COVID-19 pandemic, Statistics Canada was noting an across-the-board increase in the raw numbers of Canadians on the street.

With COVID-19, the temporary closure of shelters due to social distancing made the problem more visible than ever before, with tent cities cropping up everywhere from Charlottetown, P.E.I., to Mission, B.C., to Kingston, Ont.

Canada has simultaneously witnessed a dramatic spike in homeless deaths. In 2021, 247 homeless British Columbians died — a 75 per cent increase over the year before. Just this week, new data from Toronto Public Health found that the city’s homeless death rate has doubled in just the last three years.

Meanwhile, the fatal stabbing of Burnaby RCMP Const. Shaelyn Yang on Oct. 18 was only the most conspicuous example of a nationwide phenomenon of neighbourhoods witnessing local parks turned into cauldrons of violence and crime.

In Victoria, homeless encampments that began forming in the city’s Beacon Hill Park in 2020 were soon host to a “life-altering” attack on a developmentally delayed 15-year-old, the discovery of a full-sized chop shop for stolen bikes, and a van fire in which one man was killed.

In Toronto, a major encampment in the city’s Trinity Bellwoods Park caused a 450 per cent increase in fires, the scattering of more than 10,000 used needles in just three months and the routine uttering of threats against passersby and parks staff.

“Park visitors, including seniors and parents have told city staff they are scared to enter or walk near certain parks,” reads a recent court submission by the City of Toronto.The most immediate victims of the rising violence are the tent city residents themselves.

A tent city in Calgary was accused by police of “creating a gauntlet of violence and drug trafficking” outside one of the city’s main rehab centres. One of the tents was the site of an alleged sexual assault against a minor.

In an August press release, a coalition of Vancouver women’s centres warned that tent cities were hubs of violence against women. “With every tent city, we see a dramatic increase in gender-based violence. Women are threatened, harassed, beaten, and raped,” said Alice Kendall, Executive Director of the Downtown Eastside Women’s Centre.

According to the Leger poll, more than half of Western Canadians report that “homelessness makes me feel unsafe in my community.” In B.C., the sentiment was shared by an overwhelming 70 per cent of respondents.

A political backlash is already underway. In last month’s B.C. municipal elections, a wave of centre-right mayors were elected across B.C. due largely to their promise to aggressively tackle the issue of crime, public disorder and homelessness.

“We’re sitting by watching as business are robbed, cars are stolen from driveways, and random assaults happen on our streets,” reads the campaign platform of newly elected Kelowna Mayor Tom Dyas. In Vancouver, mayoral candidate Ken Sim won in a landslide after a campaign that pledged to pull the city out of what he called an acute “public safety crisis.”

For the most part, the victorious B.C. mayors are definitively not of the “lock them up” variety.

Sim promised to hire 100 new police officers, but he also promised an additional 100 mental health nurses and the establishment of a 24-hour addiction recovery centre.

The Leger poll similarly revealed a Canadian populace that is fed up with the crime and disorder wrought by rising homelessness — but simultaneously feels responsibility and compassion for the people caught within it.

The most unpopular strategies to address homelessness? Police clearances of encampments, and using buses to ship homeless people out of town.

“We seem to be coming to the understanding that a lot of the root causes of homelessness is mental health or addictions,” said Enns.As the spectre of discarded needles and random assaults reach into ever more neighbourhoods, Canadians aren’t so much clamouring for a hard line against tent cities so much as an acknowledgement that the country’s existing strategies against homelessness are failing.

In cities like Vancouver, the last decade has seen an explicit prioritization of the “housing first” model of ending homelessness. “The answer to homelessness is housing,” went a frequently repeated line by outgoing Vancouver mayor Kennedy Stewart.

The idea is that a homeless person can’t get clean or even consider finding a job until they’re first given a stable roof over their head. The result — at least in B.C. — has been a massive push to buy up hotels and transform them into low-barrier shelters.

In just 2021, governments bought up more than a quarter billion dollars’ worth of Vancouver real estate to house 767 homeless people — an average rate of $351,000 per bed.

Paired with this has been an aggressive focus on harm reduction; the idea of making drug use safer without any underlying pressure for addicts to get clean. In 2003, Vancouver’s InSite became North America’s first state-sanctioned facility to provide medical supervision of illicit drug use. Now, safe consumption sites are either open or planned in all 10 provinces.

But as homelessness and addiction continue to get worse, even progressive circles are beginning to question the idea that the issue can ever be truly curbed without more proactive strategies to get homeless people off illicit drugs and into managed mental health treatment.

In 2019, Leonard Krog — a longtime B.C. NDP MLA turned mayor of Nanaimo, B.C. — received widespread press attention for calling on the province to begin forcibly institutionalizing homeless people exhibiting severe mental illness.“These are people who are hearing voices all the time, who are paranoid, who won’t go to shelters because of past experiences or the state of their mental health … people who are threatening people,” said Krog at the time.

A return to institutionalization has even been pitched by David Eby, the newly minted leader of the B.C. NDP soon poised to take over as B.C. premier. In August, he proposed that British Columbians who were routinely overdosing should be forced into involuntary treatment.

Over in Alberta, in recent years the government has explicitly cut against the strategy of harm reduction, and has instead channelled its funding towards what it calls “recovery oriented care.”While the model isn’t inherently opposed to safe consumptions sites, its main priority is getting people clean and making sure it sticks. The result, according to Alberta officials, is that the worst of the overdose crisis is already behind them.

“Our numbers are plunging down, B.C.’s are continuing to go up, and that is clear, it is not in dispute,” Marshall Smith, chief of staff for Alberta’s Associate Minister of Mental Health and Addictions, told reporter Geoff Russ in September.

In August, 49-year-old Chris Schwede would become the most recent person to die in a Victoria, B.C. tent encampment.

He was only steps from one of the city’s many safe consumption sites, but had died of a suspected drug overdose in his tent, where nobody was able to see until morning that he had stopped breathing.

As Schwede’s sister Tammy Trausch would tell the Times Colonist, while there were plenty of resources around her brother to ensure that he could use drugs safely, at the time of his death getting a spot in a detox centre required an 111-day wait.

“There’s no such thing as safe supply because Chris was on safe supply and he’s in a morgue right now,” Trausch said.

The Postmedia/Leger poll was conducted between Oct. 28 and 30 among 1,534 adult Canadians drawn from Leger’s online panel. A margin of error cannot be calculated because online polls aren’t considered to be statistically representative.