CANADIAN HOUSING AFFORDABILITY GOT WORSE UNDER TRUDEAU BUT DID HE DO THE WORST? 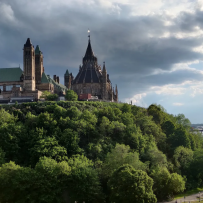 Prime Minister Justin Trudeau did the worst job with housing in the history of leaders. No, it was definitely Prime Minister Stephen Harper that oversaw the worst… No… this goes back to… Brian Mulroney? Uh, that was 30 years ago, but whatever.

Ever since Canada’s election kicked off, everyone’s been arguing about housing. More specifically, whether the current Prime Minister (PM) dropped the ball on affordability. We hate data-less arguments, so we thought we would crunch the numbers to provide some gas to pour on those dumpster fire arguments. Consider it our little gift to the world.

The truth is PM Justin Trudeau has overseen one of the fastest declines in affordability. However, he didn’t oversee the worst drop in the past 40 years — he was just close to it. Let’s take a look at who did the worst.

Today we’re looking at how affordability changed during each prime minister’s time in office. Affordability can be defined in a lot of ways, but we’ll use ownership costs. The percent of income a median household has to spend on ownership costs, to be more exact. For example, if the ratio is 50%, the median household would have to spend 50% of their gross income to cover costs. We used data provided by RBC, and this is for their national aggregate. That means home types across Canada, so it would be much worse in Toronto or Vancouver.

One great thing about this metric is the adjustment for mortgage rates. A common argument from policy makers and the industry is it’s cheap to borrow, so housing is cheap! That would be true if home prices and incomes stayed the same when rates drop. Falling rates in tight markets can make it easier for prices to rise though, making things worse. By adjusting for mortgage rates, we get a better picture of how affordability has changed.

One more thing, it wasn’t fair to use PM Kim Campbell in the data, so she was excluded. Her tenure in office was important, but didn’t even have a full year to influence costs. Great. Now on to which PM did the worst or best.

The current PM Justin Trudeau hasn’t seen the worst deterioration in affordability. However, he comes pretty close. His first full quarter in office was Q1 2016, and a median household needed 45.1% of their income to cover payments. He’s still in office, but the first quarter of 2021 saw the percent of income hit 52.0%. That’s the national level, Toronto and Vancouver are much higher.

This is a really impressive deterioration of affordability. The index saw costs rise 15.3% faster than their incomes. That’s even with interest rate cuts slashing the cost of borrowing. That didn’t help at all, it actually added fuel to the fire. The cost of ownership is now at the highest rate of income since the 90s bubble.

The current PM is in his second round of public service, and third election, but he hasn’t been in office very long. Adjusting for his time in office, the average quarterly annualized rate of growth was 2.78%. That is, it became 2.78% more difficult to carry ownership costs of a home, per year he was in office. Mortgage rates are now negative in real terms, so this is entirely due to home prices.

PM Harper Didn’t Do A Great Job With Affordability Either

PM Stephen Harper isn’t particularly known for being a champion of affordability. He did do better than the current PM though. His first full quarter in office was Q2 2006, when households needed to spend 42.8% of their income on housing costs. By the time he exited in Q4 2015, they would need to dedicate 45.1% of their income to payments.

Not as bad as PM Trudeau, but also not great. A median household saw the cost of ownership rise 5.37% faster than their incomes. He was PM for 38 full quarters though, so it must have felt very gradual to people. That’s two quarters shy of 9 years, if you’re trying to figure it out. What? You don’t count by quarters? How do you track your kid’s age if not by dividend payments?

Adjusting for the length of time, it’s much lower than the current PM. The average annualized quarterly rate of growth is 0.57% for the ex-PM. Once again, not great since affordability did deteriorate significantly. However, the current PM is seeing it deteriorate at 5x the rate. They say things happen a lot faster these days.

The percent change in income the median Canadian household would need to to spend on ownership costs by Prime Minister. Positive numbers mean more income was needed (a decrease in affordability), and negative income means less income needed (an improvement in affordability).

Neither of those PMs oversaw the worst drop in affordability in the past 40 years though. That honor surprisingly goes to PM Martin, who was just before PM Harper. From Q1 2004 to Q1 2006, households went from needing to spend 36.5% of their income, to 42.8% when they left. Ownership became 17.3% more expensive under his tenure, the fastest climb going back to the 1980s.

PM Martin wasn’t in office very long, so the speed of deterioration is blinding. Annualized quarterly growth increased by 7.67% while he was in office. For context, that’s twice the current PM’s rate. It likely wasn’t as noticeable since housing was only slightly out of reach when he started. This one surprised me the most.

The average annualized change in the amount of income a median household would need to spend per year, by Prime Minister. Higher numbers mean ownership costs increased faster than incomes faster.

No, the conclusion isn’t Liberals oversee bigger drops in affordability. Canadians actually saw the biggest improvement to affordability under Liberal PM Chretien. Cost went from 37.8% of income in Q1 1994 to 36.5% of income in Q1 2004. Yes, the percent of income needed declined by 3.4% while a PM was in office. It still wasn’t affordable for the median household, but spending 30% less of your income than you would today, sounds like a deal.

Over the  thousands  10 years he was PM, the cost of ownership made tiny improvements. The quarterly annualized growth works out to -0.34%, which doesn’t sound like much — but it’s a decline. Other recent PMs don’t have the ability to say the cost of ownership improved while they were in office. They’re competing over who did the least bad job.

Over the past 40 years, the majority of PMs have overseen a drop in affordability. This is largely due to poorly managed monetary policy, often leaning on credit growth. Relying on credit growth works for a while, until it doesn’t. A decline in affordability means more money from the rest of the economy is diverted to housing. Housing tends to have the lowest capital velocity when it comes to growing the economy. That tends to result in the reliance on more debt to keep the economy going. It’s the economic equivalent of trying to get out of a hole by digging up.