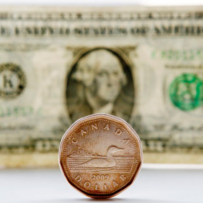 Canada’s economy grew faster than expected in October, but oil prices and stock markets are falling.

The Canadian dollar weakened to a 19-month low against its U.S. counterpart on Friday as stocks and the price of oil fell, offsetting data showing stronger than expected growth in the domestic economy.

The Canadian economy expanded by 0.3 per cent in October from September, pushed higher by strength in manufacturing, finance and insurance, Statistics Canada data indicated. Analysts had predicted an increase of 0.2 per cent.

Separate data from Statistics Canada showed that the value of Canadian retail trade rose by 0.3 per cent in October from September, thanks largely to higher sales at motor vehicle dealers and gasoline stations.

Stocks were pressured by increasing worries of slowing global growth and the threat of a U.S. government shutdown.

The price of oil, one of Canada’s major exports, extended its recent decline as global oversupply kept buyers away from the market ahead of the long holiday break. The price of U.S. crude was down 1.1 percent at US$45.36 a barrel.