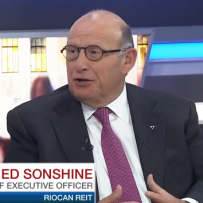 Speculation about the Canadian real estate market has run wild over the past year, with everyone from the Bank of Canada to Wall Street short-sellers warning that prices are overvalued.

But the chief executive officer of Canada’s largest real estate investment trust says there is little risk of a correction while the vast majority of property is in responsible hands.

“Between REITS and large pension fund players, we probably own 80 percent of the real estate in the country. It’s in very strong hands, and we don’t borrow a lot. When you don’t have weakness because of debt, you’ve got staying power,” said RioCan (REI_u.TO 0.00%) CEO Edward Sonshine in an interview with BNN.

The 31-year veteran of the commercial real estate industry says a lot has changed since the last major correction in the 1990s, when highly leveraged investors were more sensitive to changes in the market.

“In those days if you couldn’t borrow 110 percent of the cost of a building, you weren’t a real player. Today we work to 40 percent at RioCan. Pension funds often work to less,” said Sonshine.

“There is no doubt in my mind that Southern Ontario is just going to keep going. [Although] not always up in a straight line, whether it’s commercial our housing. The same with Vancouver,” said Sonshine.