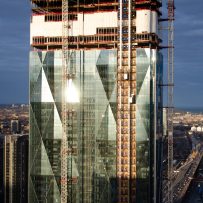 Canadian real estate is now some of the most expensive in the world. Home prices across the country, not in pricey hubs, are now comically overvalued. At this point, not even a major housing crash can restore affordability. Many think this is pandemic-related, but overvaluation has long been a concern. For at least a decade, the central bank, government, and various agencies have rung the alarms. Let’s go through some of the numbers and see what price points they felt were a concern, and proceeded to do nothing.

First, let’s start where the Canadian real estate market is currently sitting. The composite benchmark, (a.k.a. a typical home) was $798,200 in December, up 27.8% from a year before. It is at an all-time high for both price and annual growth. How does this stack up with household incomes?

National Bank of Canada’s latest estimate shows a down payment and income are far out of reach for most. A median household needs 6 years of savings for a down payment, double the average from 2000. Even if you have the down payment, incomes need to rise 88% higher to qualify for a mortgage. More than half of the country has zero chance of qualifying for a mortgage.

Good thing more than half of the country already owns a home, so this is just a problem for young people. To complicate the issue further, the academic-led non-profit Generation Squeeze highlights income disparity. When you say median income, you’re also referencing more established and older households. The median buyer looking to get into the market makes much less. On an inflation-adjusted basis, people between 25 and 34 years of age make less than they did in the 1970s. Affordability is rough for everyone, but try being at the bottom of experience and skill.

Let’s see how out of control this has become.

Let’s start with a minor technical correction for the typical home. If home prices dropped 10%, that would put the benchmark price at $717,100, where it was in April 2021. That month is the month a Canadian politician said a 10% drop in home prices would be unacceptable. On the upside, they also said home prices are still attractive to foreign buyers in that same interview.

In the technical sense, a price crash is when prices drop more than 20% from the all-time high. That would make the benchmark home price $638,560, putting them at January 2021 home price levels. A month before, they acknowledged home prices were unattainable, and floated a national foreign buyer tax.

Canada knows it doesn’t track corporate ownership, so it can’t accurately track residency. However, they still keep banging the drum on the issue, yet failing to actually track anything. The government is also conflating foreign buyers with non-resident capital, which has a bigger impact. An impact they’ve known about for almost three decades, but actively worked to bury evidence.

A Large Housing Crash Only Brings Prices To Pre-Pandemic Levels

What if a severe housing crash occurs, and home prices make a 30% drop. The typical home would cost $558,740, the same price as of December 2019. It wasn’t exactly a period where home buyers fawned over Canadian housing affordability.

The IMF had just told Canada its housing market was extended and vulnerable that month and year. They warned that “borrowing costs for riskier borrowers are near risk-free levels.” Essentially, the country was mis-pricing risk since riskier borrowers should pay higher premiums. Doing this undermined the impact of the central bank’s tightening of policy.

Funny story. The Bank of Canada (BoC) was buying mortgage bonds at the same time. This adds liquidity to mortgages, keeping interest costs lower. They scaled their purchases by 19x over the next year. It was the mullet of tightening policy — higher rates in the front, lower mortgages in the back.

Okay, so we established a 30% drop would still be out of control. But let’s keep going to see precisely how negligent Canada has been. Let’s look at where Canada would be if home prices crashed twice in a row, making a 20% drop on top of a 20% drop. The unlikely scenario would put home prices at $510,848, levels last seen in February 2017. RBC CEO David McKay warned high home prices threaten Canada’s stability back then. Do you know how bad it has to be for the lender to sound the alarm?

Canada’s national housing agency had also sounded the alarm. Its new leadership doesn’t feel the same way, however. Which brings up an important issue. Canada’s national housing agency is also a private company that insures mortgage risk. They have to actively try to make a profit, and warnings aren’t great for risk. Combining the two roles leads to an agency that easily slants with politics. It would be like Ontario telling the Ministry of Health it should pursue profit, and compete with Pfizer. It would be a bit of a conflict of interest, but that’s Canada’s housing market — the most overvalued in the G7.

Maybe 3 Housing Crashes Are A Charm? That’s Where The Bubble First Started

For shits and giggles, let’s see where home prices are if they experience a third housing crash. That would be a crash of 20%, pause, crash 20%, pause, and crash 20%. The unlikely scenario puts a typical home price at $408,700, which would be the level they were in January 2015. That was right before the US Federal Reserve exuberance index showed bubble behavior.

It wasn’t a bubble at this point, the Fed needs five quarters to declare a real estate bubble. At this point, responsible governments are supposed to begin addressing the risk. Otherwise, housing markets start to sap capital from more productive areas of the economy. This can lead to permanently slowed growth.

Shortly after was the first-time a newly elected Prime Minister promised to make housing affordable. Now in his third term, he’s finally getting warmed up, promising to fix an issue as though he had forgotten he already promised to fix it. Just three more terms, and BOOM! He’s going to get a plan in action, I feel it.

Maybe a double extreme crash scenario, where real estate prices drop 30%, pause, and then drop another 30% afterward? That brings the national benchmark price to $390,200, about January 2014 prices. BoC governor Tiff Macklem was then deputy governor and warning of a housing bubble back then. He blamed investors, who had made Canada’s real estate market extended, and “vulnerable.” Now that he’s in charge, Tiff has said the country needs high home price growth. Bless his soul.

Let’s say Canada has a very unlikely, but one of the most extreme economic collapses in history. I don’t know what would trigger it. Flying beavers that shoot molten-hot laser beams out of their eyes or something. A crash and a half with a correction in one go — a 55% decline. Would take the benchmark price to $359,200 — 45% lower. Home prices would be at April 2011 levels. That’s when the Bank of Canada warned “Asian wealth” distorted the housing market.

“…now nearly 11 times the average Vancouver family’s household income, a multiple similar to those seen in Hong Kong and Sydney—cities that have also become part of a more globalized real estate market. Such valuations are extreme in both Canada and globally,” said then-Governor Mark Carney. I believe the former Goldman Sachs banker is the only central bank head to have warned of two real estate bubbles formed under their tenure. Now that’s something I’d put on my LinkedIn.

Now, this isn’t to say home prices won’t be affordable if they make such a significant drop over time. Incomes have increased, and interest rates are much lower. Low rates are now a permanent fixture in Canada, with a neutral rate now forecast below inflation. However, that last point also means Canada’s optimal function for the economy at this point is a low-rate inequality driving machine. To put it bluntly, this is nothing short of a world-class fuck up, from at least a decade of bad policy.

The takeaway is, this issue didn’t just pop up overnight — many warnings were ignored. Every affordability measure rolled out made home prices more expensive. Even the BoC produced research showing monetary policy moved the wrong way for 30 years.

How do the federal government and central bank plan on moving forward? By doing the exact opposite of what the research shows. Instead they’ve repeated an industry narrative, failing to consider the value of money. Obviously, the best way to get out of a hole is to dig faster with bigger shovels.

On that note, maybe a small correction isn’t the emergency politicians claim it is. We keep hearing that homes are a retirement vehicle for people close to retirement. That a drop would unfairly penalize retirees that bought back in the 1980s. It sounds really wrong to let home prices fall, until you realize how much they’ve increased. It’s hard to believe retirements hinge on prices rising double the median income per year. Even more difficult to buy that narrative if you think that conclusion was drawn 40 years ago. It’s a tough sell to say retirees would be in jeopardy with a correction.

What is in jeopardy is the Canadian economy. Two generations of households are now largely dependent on parental wealth for homeownership. A point reflected in the OECD’s latest housing forecast. They see Canada’s economy as the worst-performing in the group for the next 40 years. Now that’s quality leadership in action, eh?