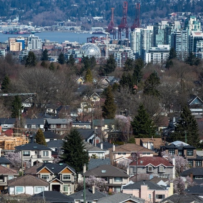 Canadian policymakers appear to have succeeded in bringing the country’s once-overheated housing market to a soft landing, according to a new report from BMO Capital Markets.

“With few exceptions, the market has absorbed earlier measures and is now warming without overheating,” BMO senior economist Sal Guatieri wrote in the report released on Friday.

In the most recent quarter, the value of home sales in most Canadian markets rose, after falling in four of the past five quarters and dragging mortgage growth to its lowest level in nearly 35 years.

Canadian homebuyers appear to have absorbed measures brought in by regulators aimed at cooling the market, according to Guatieri.

He added that housing markets across Canada were also helped by a combination of strong job and population growth, a drop in the five-year fixed mortgage rate resulting from a plunge in global bond yields, and continued tight housing supply.

Canada’s housing market is showing less risk of a downturn and is “well positioned for at least moderate gains in sales and prices in the year ahead,” Guatieri wrote.

However, affordability in Toronto and Vancouver continues to be an issue. Most Vancouver homes are still well out of reach of the typical homebuyer and buying even a bungalow in Toronto would eat up nearly half the median family income – more than double the national average.