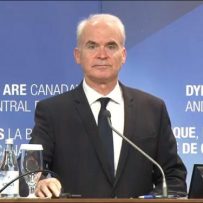 An influx of investors into Canada’s housing market has likely helped fuel extrapolative expectations on price gains and that could expose the market to a higher chance of correction, a deputy governor of the Bank of Canada said on Tuesday.

Paul Beaudry, in a virtual speech to a provincial regulator, also said Canada’s main financial system vulnerabilities – housing market imbalances and high levels of household debt – had been intensified by the pandemic.

“A sudden influx of investors in the housing market likely contributed to the rapid price increases we saw earlier this year. In such a case, expectations of future price increases can become self-fulfilling, at least for a while,” he said.
“That can expose the market to a higher chance of a correction,” he said. “If one occurs, the damage can spread far beyond the investors.”

Beaudry noted that “somewhat slower” house price growth over the summer should lower the chances of undesirable extrapolative price dynamics, but said markets such as Montreal and Hamilton, Ontario were still showing signs of exuberance.

He made clear that Canada’s financial system was sound, but said a drop in housing prices could affect household spending and that could impact employment.

Canada’s housing prices skyrocketed through early 2021, surging to a peak in March before slipping over the summer months. They have again picked up steam, nearing that record in October, according to realtor data.

The Bank of Canada last month signaled that it could start hiking interest rates as soon as April 2022. Beaudry said the longer-term structural forces that have driven global interest rates down could partially reverse in the coming years.