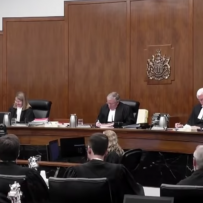 A panel of five judges is to listen to arguments from both the Saskatchewan and federal governments as well as from 16 interveners on both sides of the dispute.

Saskatchewan opposes the federal government’s plan to force a carbon tax on the province and plans to argue it is unconstitutional because it’s not applied evenly in all jurisdictions.

Ottawa says the constitution gives it the power to impose a carbon price because climate change and greenhouse gas emissions are national concerns.

The two-day hearing is to open with Saskatchewan presenting its case followed by submissions from other carbon-tax opponents.

Ottawa is to get its turn as well as interveners from the pro-carbon-tax side.

“I would put this case on a short list of important federalism decisions that courts have grappled with,” said University of Alberta law professor Eric Adams.

He said there are merits to both arguments.

Where Saskatchewan will want to keep the court focused on the federal-provincial division of powers, Ottawa is likely to steer its argument towards the issue of climate change itself, Adams said.

Saskatchewan Attorney General Don Morgan has said challenging the constitutionality of Ottawa’s carbon tax is the right thing to do for his province’s residents and its energy sector.

Saskatchewan is one of four provinces without a carbon pricing plan that will be subject to Ottawa’s fuel charge starting in April.

New Brunswick, Ontario and Manitoba are the others.

The federal government’s carbon price starts at a minimum at $20 a tonne and rises $10 each year until 2022.