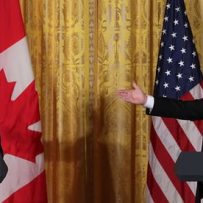 Speaking Monday in Ottawa, Freeland said she hopes the three sides — the U.S., Canada and Mexico — can keep what is good about the current agreement, while using the negotiations to modernize the pact. Among Canada’s six main objectives is a desire to make Nafta more current to capitalize on a digital revolution and make it “more progressive’’ through stronger labor and environmental protection.

“There may be some dramatic moments ahead,” Freeland said at the University of Ottawa. “Yet I am deeply optimistic about the final outcome.’’

The first round of talks begin Wednesday, with representatives gathering in Washington. President Donald Trump has threatened to withdraw from Nafta if Mexico and Canada don’t agree to more favorable terms for the U.S.

Freeland indicated there could also be some deal breakers for Canada, particularly around a fair dispute-resolution mechanism for anti-dumping and countervailing duty cases.

Read more about the Canadian, Mexican and U.S. negotiating teams

“We will come to the table with goodwill, and Canada’s characteristic ability and willingness to seek compromise and find win-win solutions,’’ Freeland said. “But we are committed to a good deal, not just any deal. That will be our bottom line.’’

It’s the country’s most detailed list of goals yet for reworking the agreement that Freeland called “extraordinary success story,” saying Canada’s economy is 2.5 percent larger every year than it otherwise would be because of Nafta.

Freeland indicated Canada will resist new protectionist measures like Buy American policies, and it will seek to add chapters on gender rights and indigenous people.

Prime Minister Justin Trudeau has made Nafta talks one of his biggest priorities, sending ministers and provincial leaders on dozens of trips to Washington and state capitals to build support for the Canadian side.