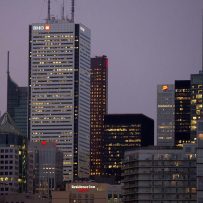 The government introduced in its April 2016 budget a plan to implement a bail-in regime for Canada’s “systemically important banks,” which would allow authorities to convert securities of a failing lender into common shares to recapitalize the bank and let it remain open and operating.

The rules proposed Friday set out key features of the regime, including which type of debt instruments will be subject to the regulations. Proposals include three new regulations. One sets out the scope of liabilities of domestic banks deemed systemically important that would be eligible for a bail-in conversion and terms of that swap. A second sets out requirements for those banks to follow when issuing bail-in securities, and a third updates the process for providing compensation to shareholders and creditors if they’re made worse off by actions to resolve the institution. The government is seeking public comment until July 17.

Regulators worldwide have been working on similar regulations to prevent a rerun of the 2008 financial crisis, which saw the U.S., U.K. and other developed nations recapitalize failing lenders with taxpayer money to keep them from dragging down the rest of the economy — and then face popular push-back from taxpayers.

While none of the banks in Canada’s top-rated system needed bailing out, the framework provides for such an event. It extended the Canada Deposit Insurance Corp.’s powers to temporarily control or own a systemically important bank and to convert shares and liabilities of the bank into common shares.

Canada’s bank regulator also released its total loss absorbing capacity, which will be used to determine whether a bank has sufficient capital to absorb losses, for comments on Friday.