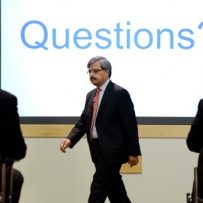 Story by: Ross Marowits in Montreal and Terry Pedwell in Ottawa, The Canadian Press

Union leaders attending Canada Post’s annual meeting were left frustrated Friday as the Crown corporation refused to provide details on its calculations on the cost of the union’s latest contract proposals.

CUPW president Mike Palecek repeatedly asked Canada Post officials to spell out how they arrived at the number, but was told to ask his negotiating team for a breakdown.

Palecek replied that his negotiators have asked for a breakdown but have been stonewalled.

He accused Canada Post of using “selective information,” noting that the $1 billion estimate doesn’t mention a decrease in labour costs.

Canada Post wouldn’t answer questions at the meeting about negotiations, but did speak at length about the volatility of its pension plan and defended its proposal for a defined contribution plan for new employees.

Both sides say little progress has been made on major contract negotiation issues as the country’s largest postal union nears the end of their 60-day strike mandate.

After meeting Friday with both sides, Treasury Board President Scott Brison said the government is committed to a fair and balance collective bargaining process.

“My message to them was the same: Canadians hope they will be able to negotiate a new collective agreement without a work stoppage,” he said in a news release.

Canada Post’s chief financial officer, Wayne Cheeseman, said the pension plan’s obligations are growing faster than the corporation, noting the plan’s solvency deficit at market value rose by $2 billion in the last six months to reach $8.1 billion by the end of June.

“What we are attempting to do is certainly recognize that the pension plan is important for our existing employees and retirees but try and address the long-term sustainability of the pension plan at the same time,” Cheeseman said.

The former Harper government gave Canada Post some relief on pension payments until the end of 2017. Canada Post made a $278 million contribution to the plan last year, including $35 million in special payments. It would have been required to pay $1.4 billion without the government relief.

A union leader pointed to the stronger $1.2 billion surplus of the plan on a going concern basis, noting the solvability deficit is only relevant if Canada Post winds up its pension plan.

Meanwhile, Canada Post CEO Deepak Chopra said he welcomes Ottawa’s latest review of its operations, adding it will still be required to be financially sustainable.

“This is a healthy process for us,” he said.

Chopra said the postal service continues to face the challenges of dwindling mail volumes amid a shift to digital, despite a growth in parcel volumes.