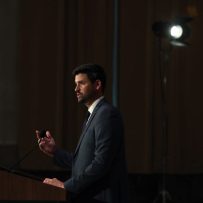 Sean Fraser, who was appointed to the post in October after Trudeau’s Liberals won re-election, said the government is on track to exceed its goal of offering permanent residency to 401,000 people this year. Speaking in an interview with Bloomberg, Fraser said he’s even prepared to increase immigrant targets — currently set at 411,000 for next year — if he deems additional newcomers are needed to fill labor shortages.

“That’s something I’m very much open to,” Fraser said by phone, adding no decision has been made yet on future targets. Any pick up in numbers will be conditional on appetite from businesses and communities for more workers, he said.

The government has until mid-February to provide new immigration targets to Parliament, Fraser said.

Canada has been relying heavily on international migration as its top economic driver, with foreign born workers making up almost the entirety of employment gains over the past decade.

Like other nations, Canada suffers from an aging native-born population and relatively low fertility rates but has been able to produce the fastest population growth in the Group of Seven in recent years. High levels of foreign-born workers, for example, have helped to mitigate wage pressures in Canada in recent months at a time when inflation has been surging.

As flows slowed during the pandemic because of travel restrictions, the government adapted by turning more temporary foreign workers and students already in the country into permanent residents, giving them a path to citizenship. There are more than 1 million people in the country with neither citizenship or immigrant status.

The strategy worked. October data from Immigration Canada show 46,315 people were granted permanent residency, a monthly record that brought new immigrant numbers so far this year to 313,838. Canada needs to offer permanent residency to 44,000 newcomers in each of the final two months of 2021 to achieve its target.

“We are more than on pace to hit our target of 401,000 for the year, which I think a lot of people doubted,” Fraser said.

He also said immigration has been paramount in blunting the pandemic’s negative impacts on the economy, and will help navigate some of the labor shortages going forward.

“Targeting a pool of talent that exists globally to fill gaps in the Canadian labor force has to be part of the strategy,” according to Fraser.