Canada Is the Safest Source of Energy, Alberta Premier Says 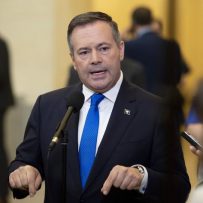 When Alberta Premier Jason Kenney announced last week that he would be going on a week-long tour in the United States to promote investments in the province’s energy sector, little did he (or anyone, for that matter) know how the geopolitical risk premium in the oil market will spike this week.

After this weekend’s attacks on key oil infrastructure in OPEC’s largest producer and the world’s top oil exporter, Saudi Arabia, geopolitical concerns in the Middle East are mounting while the perceived reliability of supply from the Persian Gulf is dropping.

In the aftermath of the attacks in Saudi Arabia, with oil prices soaring the most on record on Monday, Alberta Premier Kenney began his charm offensive with U.S. investors with several key messages about Canada’s oil and Alberta’s energy industry.

First, Canadian oil is the most reliable and safe energy source for the United States and for all oil importers in the world for that matter—Canada is one of the few democracies in the world with huge oil resources and massive domestic production. And unlike OPEC dictatorships, as Kenney described producers in the cartel, there isn’t a geopolitical risk premium in Canadian oil production and supply.

Second, Canada has reduced the carbon footprint of oil sands production and despite misinformation in the media, its environmental and labor standards are much higher than in oil production in OPEC or Russia, Kenney says.

The third key message of the Premier in that Alberta is open for business and Canadian energy companies are buying opportunities right now.

A lot of capital has left Alberta and the Canadian oil industry in recent years, Kenney admitted in an interview with Bloomberg at the start of his U.S. tour on Monday. Every one of those dollars has moved into the energy sector in the United States and other jurisdictions, fueling the growth in the Permian and the Bakken, for example.

“Good on the United States for developing its own resources,” Kenney said, and added:

“It’s in everybody’s interest, and it’s in the interest of global peace and security, that we should have greater global access to Canadian energy to compete with and displace unreliable OPEC energy and energy produced at lower environmental, human rights, and labor standards in OPEC dictatorships and Russia for example.”

Referring to misinformation in media about Canada’s oil sands, Kenney—whose government has a Fight Back Strategy—said that “Special interests have sought to landlock Alberta & Canada’s resources, even as we have supply that could help displace oil from OPEC dictatorships.”

“We will expose these interests, where their money comes from & campaign aggressively to bring investment capital back to Alberta,” Kenney added.

In the wake of the attacks in Saudi Arabia, Alberta is one source of reliable, secure, and up-to-environmental-standards energy source for America and for the world, Alberta’s premier tells investors and think-tanks in the U.S.

“The strike on Saudi refineries should be a wake up call. The world needs reliable, stable energy, and Alberta can provide it,” Kenney said.

“We are the safest and most reliable major source of energy on the face of the planet and for Americans that is a great benefit. And so, we want to remind our American friends here that if they don’t want to pay a security premium for energy, they should be operating more and investing more in Alberta and importing Canadian energy. We can do that by getting some of these pipelines completed, including the Line 3 replacement and of course Keystone XL,” the premier told Bloomberg.

Moreover, Canadian companies are massively undervalued and this should be seen as a buying opportunity, especially “in light of the security premium that people have to pay to access Middle Eastern oil, given what happened last week,” Kenney says.

“And so I hope investors will realize: safety, stability, security in Canada is worth an awful lot,” Alberta’s premier noted.