Canada could be headed towards decades of deficits: Finance Department 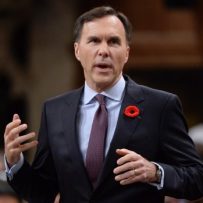 OTTAWA — Federal numbers released quietly by the government late last month are painting a bleak picture of Canada’s financial future — one filled with decades of deficits.

The report, published on the Finance Department website two days before Christmas, predicts that barring any policy changes the federal government could be on track to run annual shortfalls until at least 2050-51.

The document says that if such a scenario plays out, the federal debt could climb past $1.5 trillion by that same year — more than double its current level.

To help explain the prediction, the report points to the major economic challenge caused by the gradual retirement of baby boomers. The demographic shift is expected to shrink work-force participation, erode labour productivity and drive up expenditures for things like elderly benefits.

However, the report cautions that its projections are intended to represent a plausible baseline and insists they are not forecasts because long-term estimates are inherently uncertain.

For example, the document estimates policies that successfully boost labour force paticipation and productivity over the coming decades have the potential to increase economi growth by as much as 22 per cent by 2055 and improve the outlook.