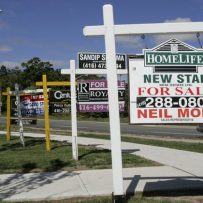 This could be the toughest year in living memory to make predictions about the economy ― especially the housing market.

Amid the worst economic slowdown in decades, home sales and prices soared in many Canadian cities in 2020, along with housing markets in many other countries. The average house price in Canada has shot up by 13.8 per cent over the past year, and by 14.6 per cent in the U.S.

No wonder this year’s batch of year-end forecasts for Canada’s housing market are all over the map. From predictions of rapid price growth and housing shortages to warnings of a market crash, there’s a forecast out there for every taste. Which, admittedly, isn’t very helpful.

Broadly speaking, there are two camps: Those who see this year’s hot housing conditions continuing into next year, thanks to low mortgage rates and a lack of housing supply, and those who see trouble coming once mortgage deferrals and government income supports stop.

Not surprisingly, real-estate groups are aboard the boom train. The Canadian Real Estate Association, an umbrella group of local real estate boards, is forecasting a 9.1 per cent jump in house prices in 2021, with Ontario leading the way with a 16.3 per cent jump in prices, followed by Quebec at 13.6 per cent.

“Current trends and the outlook for housing market fundamentals suggest activity will remain relatively healthy through 2021, with prices either continuing to climb or remaining steady in all regions,” CREA said in a forecast published in mid-December.

Mortgage rates have fallen, including the rate on the Bank of Canada’s stress test for borrowers, CREA noted. On top of that, record levels of migration into Canada in recent years have pushed up demand for housing, and CREA expects that to continue once the pandemic ends.

But right now, with border shutdowns in effect, immigration into Canada is at historic lows, and several provinces ― including Ontario and British Columbia ― saw their populations decline in 2020, the first time that has happened in records going back to 1946.

That’s one reason why some forecasts are calling for a decline in house prices in 2021.