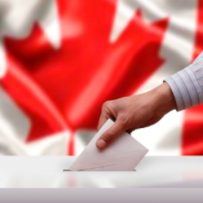 Here’s an overview of what NDP leader Tom Mulcair, Liberal leader Justin Trudeau and Conservative leader Stephen Harper have promised as it relates to your personal finances as well as CFAA’s Election Guide 2015.

NDP: Cancel income splitting for families with kids under the age of 18 but keep it for seniors; eliminate the CEO stock option loophole that allows wealthy CEOs to avoid taxes on 50% of income received from cashing in company stock (with proceeds invested into eliminating child poverty); increase investment in the Working Income Tax Benefit (WITB) by 15% to further support working Canadians who live below the poverty line; introduce income averaging for artists.

NDP: Phase out interest on all federal student loans over the next seven years, saving students up to $4,000 in interest costs and boost funding for the Canada Student Grants program for low- and middle-income students and/or students with dependents by $250 million over four years.

Liberals: Increase the maximum Canada Student Grant to $3,000 per year for full-time students and to $1,800 per year for part-time students; increase the income thresholds for Canada Student Grant eligibility, giving more students access to the program; cancel existing textbook tax credits; eliminate the need for graduates to repay their student loans until they are earning at least $25,000 per year; invest $50 million in additional annual support to the Post-Secondary Student Support Program for Indigenous students attending post-secondary school.

Conservatives: Eliminate the income threshold used to assess the Canada Student Loans Program, so that students who work and earn money while studying won’t be denied access to the program for that reason; reduce the expected parental contribution amount to increase loan accessibility to approximately 92,000 students across Canada; expand the number of low- and middle-income students who are eligible for the Canada Student Grant program by making these grants applicable to short-term, vocational programs; increase the maximum annual grant for low- and middle-income families from $3,500 to $4,000.

NDP: Introduce a green home energy program to help retrofit at least 50,000 homes and apartment buildings making them more efficient and lowering energy bills; create 365,000 affordable housing units across Canada; mandate the Canada Mortgage and Housing Corporation to provide grants and loans to construct at least 10,000 affordable and market rental units, with any revenues to be reinvested back into rental housing supports.

Liberals: Start a new, 10-year investment in social housing infrastructure, prioritizing affordable housing and seniors’ facilities (including building more units and refurbishing existing units); encourage the construction of new rental housing by removing all GST on new capital investments in affordable rental housing; loosening the existing qualification rules for the Home Buyers’ Plan to allow more Canadians affected by sudden and significant life changes to access their RRSP savings for a down payment; review escalating home prices in high-priced markets, including Toronto and Vancouver, and review all policy tools that could keep homeownership within reach for more Canadians.

Conservatives: Establish a new, permanent Home Renovation Tax Credit which will allow homeowners a tax credit on up to $5,000 per year on home renovations. Increase the first-time Home Buyers’ Plan from $25,000 to $35,000 per person with a goal of more than 700,000 new homeowners by 2020.

NDP:  Create 1 million new child care spaces over the next eight years and cap their cost at $15 per day; add five weeks of parental leave for the second parent, extending the program to include same-sex couples and adoptive parents; doubling parental leave time for parents of multiples; provide regular EI access to parents who find themselves out of work after taking parental leave.

Liberals: Create a flexible parental benefits plan allowing parents to receive benefits in smaller blocks of time—for example, once every two weeks rather than once per month—and make it possible for parents to take a longer leave—up to 18 months when combined with maternity beneﬁts, although at a lower beneﬁt level; scrap the Universal Child Care Benefit for the wealthiest families, and instead introduce the Canada Child Benefit that will give the majority of families up to $2,500 more, tax-free, every year (typically for a family of four).

Conservatives: Increase parental leave to 18 months, allowing parents to take up to six months of additional unpaid leave; allow self-employed parents to earn money without impacting EI payments; offer choice between full parental leave EI payments for 35 weeks, or extend those payments, at a lesser rate, for up to a maximum of 61 weeks; women receiving EI maternity benefits will also be able to earn employment income under the Working While on Claim pilot project (this is currently permitted for those receiving EI parental benefits).

Conservatives: Double the Canada Savings Education Grant (CESG) contribution from 10 to 20 cents for middle-income families and from 20 to 40 cents for low-income families on the first $500 put into Registered Education Savings Plans (RESPs) each year, amounting to as much as $2,200 more per child in additional grant money.

NDP: Convene a first ministers’ meeting within six months of taking office to come up with a plan and a timetable for expanding the Canada and Quebec Pension Plans; scrap the Conservatives’ plan to gradually hike the age of eligibility for Old Age Security (OAS) benefits to 67 from 65 over six years starting in 2023; boost funding for the Guaranteed Income Supplement (GIS) by $400 million, a move aimed at lifting 200,000 of Canada’s poorest seniors out of poverty.

Liberals: Restore the eligibility age for OAS and GIS back to 65; introduce a new seniors price index to ensure benefits keep up with rising living costs; introduce a 10% boost to the GIS for single, low-income seniors; leave pension income splitting for seniors intact.

NDP: Update the Consumer Protection Act to cap ATM fees at a maximum of 50 cents per withdrawal; ensure all Canadians have reasonable access to a no-frills credit card with an interest rate no more than 5% over prime; eliminate “pay-to-pay” by banks in which financial institutions charge their customers a fee for making payments on their mortgages, credit cards, or other loans; take action against abusive payday lenders; lower the fees that workers in Canada are forced to pay when sending money to their families abroad; direct the CRTC to crack down on excessive mobile roaming charges; create a Gasoline Ombudsperson to investigate complaints about practices in the gasoline market.

Liberals: The party has not included any specific measures related to consumer protection in its election platform.

This fall, on October 19, Canadians will go to the polls in a federal election. Prime Minister Stephen Harper, called the election on August 2, making this the longest election campaign in modern Canadian history. As this goes to press, the Conservatives, NDP and Liberals are virtually tied in the public opinion polls. The closeness and volatility of the polls, and new and redrawn federal electoral districts, are making this election tough to call.

The Conservatives are campaigning against tax increases. They also promised a reduction in the federal income tax rate for small businesses, and a review of the test for a business to qualify as an active business (which allows a lower corporate tax rate.) Landlords want the test to be reformed so that more landlords can qualify.

The NDP has expressed support for the reduction in the small business tax rate. However, the NDP is promising to fund new programs by raising corporate taxes, other than taxes on small businesses. The Liberals advocate higher income taxes on high income individuals.

NDP leader Thomas Mulcair addressed the Federation of Canadian Municipalities on June 3. According to the Canadian Press, Mulcair promised “a tax-break to encourage construction of 10,000 affordable housing units over the next 10 years.” CP went on to report, “He said an NDP government would work with CMHC on an income tax incentive that would allow people to avoid capital gains taxes if they plow money back into more ‘affordable’ rental housing investments. An aide to Mulcair said the program would cost Ottawa $500 million annually.” That is approximately the cost of a more general tax deferral program which CFAA has advocated in the past. The Liberals are promising to provide for-profit landlords $125 million per year in tax incentives to renovate existing affordable rental housing, and to provide substantial funding for repairs to social housing. The Liberals also promise to eliminate the GST on new rental buildings, and to provide loans for new affordable rental housing.

Fairness between tenants and homeowners

The Conservatives are promoting homeownership in the election campaign. They have promised a home renovation tax credit (with no indication that any matching program would apply to rental units.) The Conservatives have also promised an increase in the amount of money that can be borrowed from an RRSP to make a down payment on a house, from $25,000 to $35,000. The Conservatives have also pledged to find out what percentage of home purchasers are foreign residents, primarily to decide whether to address the perceived issue that foreign residents are driving up prices in Vancouver and Toronto.

The NDP are more inclined to see renting a home as an equally good life path rather than buying a home and property. The Liberals generally fall somewhere in the middle.

The Liberals and the NDP are both promising a National Housing Strategy, with federal involvement in housing programs, whereas the Conservatives oppose the creation of such a strategy. Both the NDP and the Liberals may provide more money for social housing repairs and construction, while the Conservatives are restricting the amount of federal money available for social housing programs, rent subsidies and homelessness measures.

The Conservatives are open to allowing the available federal money to be used for direct tenant rental subsidies, while the Liberals only sometimes support tenant rental subsidies. In the past the NDP has generally been reluctant to support rental subsidies paid to tenants directly instead of social housing. However, the NDP does generally favour increased income support for low-income residents, which is a positive policy for landlords since it helps tenants pay their rents.

Energy and the environment

Several years ago, the Conservative government rejected rules that would have mandated high-efficiency furnace and boiler replacements. They also remodelled an energy retrofit program to improve it for landlords and tenants, before discontinuing the program for both rental property

and owner–occupied housing. Both the NDP and the Liberals advocate policies and regulations that aim to reduce pollution and greenhouse gases.

As for putting a price on carbon, the Conservatives are now opposed to “job killing carbon taxes.” The NDP advocates a cap and trade system, in order to create a competitive market for carbon in which the revenue generated would be reinvested in green economies. The Liberals would set national carbon emissions pricing, and work with the provinces to establish carbon reduction goals.

Beginning a decade ago, the Conservatives allowed CMHC to increase amortization periods and reduce down payments for home buyers. More recently, the Conservatives reversed those changes to reduce the risk of default by new homebuyers, and to try to avoid a housing bubble, by achieving a “soft landing” for house prices. CMHC is gradually reducing the public liability for mortgage defaults, for example by stepping out of the market for loans on homes bought for more than one million dollars. Both the Liberals and the NDP may see a role for CMHC to use its profits from mortgage insurance to fund social housing repair and construction.

CFAA works to influence all the main parties, both in government and in opposition, so that landlords’ interests are protected. That often means advocating for measures which also help tenants, since the interests of landlords and tenants often align.

CFAA urges landlords to participate in the federal election, in order to raise the likelihood that the parties will want to earn the support of landlords.