Calgary: To Build or Renovate? 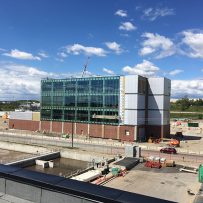 When it comes to the big decision to “build or renovate,” it’s understandable that it invariably conjures up residential properties.

However, in the Calgary market, trends to build or renovate are also relevant in industrial, commercial and institutional (ICI) markets. In addition, there is the often-forgotten construction science of infrastructure.

Many industry stats underscore that Calgary “build or reno” trends are either adjusting or outright changing. “It seems that much of Canada may be somewhat unchanged but Calgary is shifting,” notes the industry-savvy Bill Black, chair of the Calgary Construction Association (CCA), the effective voice for Calgary’s construction sector.

“Our current downturn in commercial volumes, the ‘flight to quality’ that replaced a lot of aging office building inventory, high vacancies with no sign of office leases recovering, and the new energy code raising standards may have all conspired to begin a drive towards renovation and, mainly, superficial upgrades.”

He explains the ‘flight to quality’ industry term, usually used to describe the REIT-fuelled drive to build a large number of quality highrise office buildings in a city with a number of older ones. “Those who own the older ones may not like the expression but there is no doubt that the concept of Type A office space has been redefined, especially downtown, over recent years.

“There is also a noticeable trend of office buildings being considered for repurposing towards the retail and residential market.”

With the most common word-association focus of build or reno options being on residential decisions, Shannon Lenstra, president of Calgary’s Kon-strux Developments, the 2018 winner of BILD Calgary Region’s Renovator of the Year Award, points out, “The balance between building new and renovating is just like anything else. Residential homeowners tend to follow trends. We are always in the mix and have the team and experience to build new, gut-and-remodel, or tweak and improve an existing project.

“Since we do all types and sizes of renovations, from huge top-to-bottom custom-everything gut jobs to tiny closets and guest bathrooms, our business is client-driven and every job is different.” This is because every client is different and every house is unique, with differing issues, timelines, budget items and esthetics through the entire planning and building process.

“Structural renovations are less fun for clients,” she notes. “Mostly because they involve fixing something that should have been done right the first time – and now they’re spending money to change or repair it.”

Lenstra also mentions that although the build or reno decision is impacted by various personal and market factors, she points out from experience that people get a better ROI on ensuite and kitchen renovations, particularly for people who plan to sell their home in the next three to five years.

“We are also doing a lot of additions and full-house renos as the market is picking up. A lot more people are staying in their current areas that they like and updating their outdated homes,” she says. “Lot sizes in older communities can’t be beat. And having mature trees makes a real difference to the ambiance and value of a house.

“Everyone is interested in energy efficiency now, so we prioritize educating our clients on the options and encourage them to include extra insulation, triple-paned windows, solar tie-ins, in-floor heating and other ways to stretch their energy dollar.”

As with many aspects and dimensions of particularly Calgary-area business, the build or reno trend has been impacted by key influencers like the downturn and generational transitioning. Residential construction (more than ICI) is dealing with the festering boomers versus millennials factor.

“In Calgary, the generational dynamic seems to be moving slowly, overshadowed by economic factors,” Black says. “Boomers are more conditioned to be able handle the cycle as they have been through it before, however they may be relying on older habits as a way to deal with this downturn and the recovery. Millennials are not as conditioned by experience and are coming to terms with their first major downturn cycle.”

He points out that, when it comes to the economy and the effects on Calgary’s commercial real estate market, there is a definite impact, especially concerning vacancies. “There’s nothing like empty buildings with no quick end in sight to push investors into new endeavours.”

Lenstra agrees that regional or global downturns impact the industry and everyone in it. “When it comes to the energy sector, Calgary’s fortunes go hand and hand with the price of oil. You can’t take out such a huge sector and not think it would have an effect on everybody around.”

She admits that the generational factor is huge, especially for the reno industry and cites, according to StatCan numbers, that millennials are expected to overtake boomers in population in 2019, as their numbers swell to 73 million and boomers decline to 72 million. “We are adjusting to the boomers retiring and the millennials coming in with different flows and work patterns. The affordability of the housing stock in Calgary is a real issue for younger buyers. Like in larger urban areas, we are seeing some renters investing in their rental properties when an owner won’t do so – bathroom renovations and kitchen upgrades – in long-term rentals that people expect to stay in for years to come.

“But home ownership is still a goal for high-earning young people and millennials who have parents interested in providing down payments on a house. This demographic puts an emphasis on multi-use spaces.”

The Calgary Construction Association suggests some key influencers when it boils down to the build or reno decision including:

Black speculates on the next five years or so of Calgary-area build or reno trends: “Considerable flight to quality will happen on highrise rental apartments, leading to more multi-family developments. There will be reno, repair and repurposing of aging inventory and buildings may be changing hands.”

In a different world from the usual stereotypes of the residential and ICI build or reno sector is the overlooked and taken-for-granted construction science of civil infrastructure.

From the high-visibility big pieces of heavy equipment, the crews with the day-glow vests, the roadside “caution” signs and the sometimes-mangled orange cones.

It is also part of the widely-respected specialty and expertise of the industry-respected Graham Construction, one of North America’s premier integrated construction organizations. Jayson Veldhoen, Alberta operations manager at Graham, highlights some key civil infrastructure differences. “In general, ICI construction tends to be driven by private funding. Civil infrastructure projects tend to be publicly-funded and publicly-owned. And a basic feature of publicly-owned and funded projects is they tend to be highly visible and widely publicized, due to their potential impact on a wide variety of community stakeholders.”

He adds that while most ICI projects tend to be confined to an enclosed construction site, public infrastructure (roads, bridges, on- and off-ramps, and overpasses) is highly visible from passing traffic. “Infrastructure sites have many traffic flow, pedestrian and facility operations aspects.

“This year, we are starting to see the end of that project momentum and stimulus spending, and an increase in competition for fewer infrastructure projects. Some government projects in Alberta are being postponed due to a lack of funding. But governments know that infrastructure improvements can make businesses more efficient and facilitate business revenues,” Veldhoen says with positivity.