Rapid transit: Calgary and Vancouver have built far more in the last 20 years than Toronto 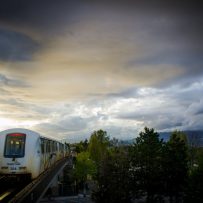 While it’s easy to envy New York City, London or Paris for their far-reaching subway systems, Torontonians should turn their envious attentions a little closer to home. According to a new report from the Pembina Institute, the big city lags other major Canadian metros on a number of transit infrastructure fronts.

The study compared Toronto, Montreal, Ottawa, Calgary and Vancouver and looked into factors such as population, ridership and rapid transit creation over the last twenty years.

While Toronto may have the highest amount of transit riders per capita with residents taking an average of 133 transit trips per year, Calgary residents are better serviced. The city has more rapid transit infrastructure per capita than all the other cities on the list. (The report defines rapid transit as featuring vehicles that are separated from other traffic, get priority signalling, and have frequent enough service that the maximum wait time during peak times is just 10 minutes during peak times etc. etc.)

The report notes the discrepancy between ridership and new infrastructure, stating “it is clear that Toronto’s rapid transit system is working overtime to move riders around the city.” While it lauds the boom in express bus service and the upgrades to right-of-way streetcar service on Spadina Avenue (remember the Spadina bus?) and the existing St. Clair streetcar, there’s still the matter of dithering and “repeated changes to transit plans.”

For more details, check out the table from the Pembina Institute:

Here are a few other interesting points from the cross-country report: