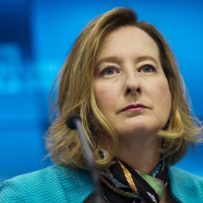 Bank of Canada officials continue to characterize the country’s economic performance as “solid,” despite a recent soft patch they believe is only temporary.

Senior Deputy Governor Carolyn Wilkins, in a Calgary speech, reiterated the main messaging from Wednesday’s rate decision, where the central bank kept rates unchanged but expressed growing confidence Canada is on track for a rebound. The speech is what the central bank calls its Economic Progress Report, in which it aims to provide insight into deliberations following rate decisions not accompanied by new forecasts.

Despite pockets of weakness and trade uncertainties, the overall picture of the economy is a strong one, Wilkins said. Before being set back at the end of last year, it had been near capacity, with unemployment at historic lows, wages improving and inflation returning to around 2 per cent.

“That’s the perspective that we, as central bankers, need to take to meet our inflation objective,” according to her comments from a prepared text of the speech.

The comments were largely in line with the Bank of Canada narrative that there’s underlying strength in the economy, the current slowdown is likely just a “detour” and while borrowing costs are on hold for now, the next move is more likely to be a hike than a cut. It’s a view that has put the Bank of Canada at odds with investors betting growth will slow further and the central bank will likely cut.

To be sure, trade risks remain prominent and have curbed investment, said Wilkins, citing this as one of the key reasons for a recent slowdown in Canadian and global growth. It’s a key reason why central bankers globally have taken a dovish turn in recent months, she said.

“Given these developments both in Canada and globally, it’s no surprise that policy-makers responded,” she said.

“Recent data suggest that investment in the non-energy sectors has started off the year in positive territory,” Wilkins said.

In the energy sector meanwhile, Wilkins said the central bank estimates investment will fall by another 20 per cent before stabilizing, after already halving between 2014 and 2016.

Here are some additional details Wilkins provided about the Bank of Canada’s rate deliberations this week.