BARRIE’S BLUEPRINT FOR THE FUTURE 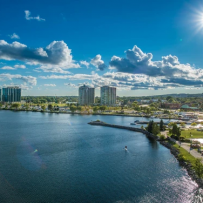 Barrie’s politicians are setting the bar high when it comes to how they want the city to evolve, to grow and become far more inclusive when it comes to creating a true multicultural community.

During a recent webinar hosted by the Toronto chapter of the Urban Land Institute (ULI) entitled Barrie: The Changing Face and Space, Mayor Jeff Lehman laid out a blueprint that will see the community be transformed in an assortment of different ways.

From a single home sales perspective, there is no doubt, the market is hot, but it is going to take more than single detached homes to meet all the housing requirements of a city that in 20 years is projected to have a population of 253,000 and according to Lehman, that will rise to 298,000 by 2051.

Massive development will be necessary to meet those numbers. “Until this year, I would doubt that forecast,” Lehman said. “I have a background in land economics and would have told you that was an aggressive number, but COVID-19 has changed many things.

“We call this program The Changing Face and Space because not only is it about physical planning and the buildings we’re going to need to house this growth, but cities are a collection of individuals making choices about their life, making choices about where they live and work and spend their time. The face of Barrie is very much changing.”

Plans calls for the municipality to evolve into a regional centre with its own thriving economy, and a pivotal initiative to help make that happen is a district known as the Urban Growth Centre (UBC), which a city document defines as consisting of the “traditional downtown area as well as a significant portion of the historic Allandale neighbourhood.

“Moving forward, the area will serve as the focal point for higher-density growth and intensification in Barrie.”
Lehman said that there are currently 14 developments planned for the UBC with an estimated gross floor area of more than 250,000 sq. metres that will add upward of 3,000 residential units to the district.

Of note, the tallest building currently in Barrie totals 16-storeys, which pales compared to a 41-storey structure that is scheduled to be built. It is a project, the mayor said, that it not without its controversy, adding there are many people opposed to increased density and see it as contributing to increased traffic, crime or other social problems.

The upside is that it creates “customers for shops and services in our historic downtown. “This is key to the vision that we have for the future. We see downtown as a residential neighborhood as well as the kind of independent commercial district and food and drink district that can really thrive.

There is also a desperate need for more rental units across the city. According to Lehman of all Canadian census metropolitan areas, Barrie has had historically the lowest percentage of rental tenure, and the highest percentage of ownership, which is a “function of how we grew in the 1980s, 1990s in the first decade of the 2000s.

“There are strengths in that there’s a lot of equity that people can access in their homes, but it has caused such a severe affordability crisis when it comes to rent. Our rent now for a one-bedroom apartment on average is only $100 a month less than in the city of Toronto.

“Now that’s partly because the City of Toronto rental rates had collapsed under COVID and it’s a short-term situation and correcting back again, but it is in part because Barrie has such a substantial shortage of purpose-built rentals.”

The goal, said Lehman, is to create a municipality where people can find “good and fulfilling careers, not just jobs, not just people-serving employment, but an economy that is unto itself and creates opportunities for young people to stay, grow and learn.

“We need that whole spectrum of additional supply if we are going to address the affordability challenge.”
Richard Joy, executive director of ULI Toronto, said it is clear that Barrie is embracing its future as the epicenter of one of the GTA’s most dynamic urban neighbourhoods.

“It’s a fast-growing city that understands that its demographics are changing and is making diversity and inclusiveness a civic priority.”