Bank of Canada Upbeat on Economy, Remains Cautious on Rates 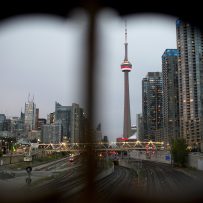 The Bank of Canada released an upbeat assessment of the country’s economic expansion, but reiterated the central bank will remain cautious as it seeks to bring interest rates back up to more normal levels.

The outlook was delivered in a speech by Deputy Governor Tim Lane, a day after an interest-rate decision where the central bank left borrowing costs unchanged. The aim of the speech was to outline “the considerations that figured most prominently” in the rate deliberations, Lane said.

“We’ve been balancing the risk of undermining the economic expansion by moving too quickly with the risk of delaying too long and needing to raise rates sharply later to rein in inflation,” Lane said.

Like central banks elsewhere, the Bank of Canada has been trying to figure out how to bring historically low interest rates to more normal levels, without inadvertently triggering another downturn. The central bank estimates that its neutral interest rate — a rate that keeps the economy neither too hot nor too cold — is between 2.5 percent and 3.5 percent, versus its current policy rate of 1.25 percent.

Traders aren’t fully pricing in the next rate increase — which would be the fourth in the cycle — until July, according to Bloomberg calculations on overnight index swaps. The market expects two to three more hikes this year, with the odds favoring two.

The Bank of Canada has already increased borrowing costs three times since July, as the economy runs up against capacity.

Lane said material slack in the economy, “especially” in the labor market, has been largely absorbed and he downplayed concerns about a growth slowdown at the end of last year. Later in the speech, he said the “elevated long-term unemployment rate” and “relatively low youth participation rate” suggests there is still “some slack” in the Canadian labor market.

He tempered the optimism with a list of uncertainties that threaten the outlook. These include everything from a growing protectionist threat in the U.S. to persistent competitiveness challenges for exporters to worries about how highly indebted households will react to higher interest rates.

A cautious approach to interest rates is allowing the bank to assess how the normalization process is moving, including the possibility the expansion is driving investment higher and generating more capacity for the economy to grow without fueling inflation.

Lane was particularly upbeat about the U.S. economic expansion that he said was “solid” and “robust,” with the potential the economy still has upside if it creates a virtuous circle by fueling business and household confidence.

Recent market volatility, which he said may have been amplified by technical factors, also reflects a repricing to a faster expected path for inflation in some economies, Lane said.

Rising bond yields in the U.S. “can be expected” to put pressure on yields elsewhere, including Canada, which could act as a tightening in financial conditions.