Bank of Canada holds interest rate at 1.5% amid NAFTA negotiations 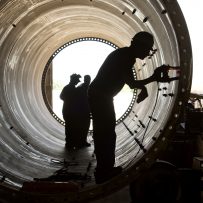 Bank of Canada Governor Stephen Poloz held borrowing costs steady Wednesday as policy makers await the outcome of NAFTA negotiations, but reiterated “gradual” hikes will eventually be warranted because the economy is at capacity.

The Ottawa-based central bank left its overnight benchmark interest rate unchanged at 1.5 per cent on Wednesday, as expected by 20 of 21 economists in a Bloomberg survey, after raising a quarter percentage point at its last decision in July.

The statement introduces language, in the key final sentence, that acknowledges the accelerated pace of developments in the NAFTA negotiations currently underway in Washington. It remains unclear whether Canada will join a deal the U.S. has forged with Mexico, or be left out.

The Bank of Canada is “monitoring closely the course of NAFTA negotiations and other trade policy developments, and their impact on the inflation outlook,” it said.

An agreement would clearly give Poloz more comfort in pressing ahead with a hiking cycle that has already seen the central bank raise borrowing costs four times since mid-2017. A collapse of talks would cast doubt on those plans.

Investors are anticipating as many as three more increases over the next year, starting with a move at the central bank’s next decision in October.

Outside of trade, the Bank of Canada painted a picture of an economy that is doing well enough to require higher rates. According to the statement, Canada’s economy has been operating at near capacity “for some time,” business investment and exports have been growing “solidly for several quarters,” the housing market is stabilizing, financial stability risks are moderating and employment gains are supporting consumption.

Policy makers also removed phrasing that has appeared in the last seven decision statements about monitoring the “evolution of capacity,” possibly a nod to the central bank’s increasing confidence that economic slack has dissipated.

At the same time, there are few signs of worries about overheating or sense of urgency in hiking rates. The central bank downplayed the significance of July’s inflation spike, saying it expects readings to move back towards 2 per cent early next year as the impact of higher gasoline prices wane, with core inflation “firmly” around 2 per cent.

Wage growth is “moderate” and the economy is “evolving closely in line” with the central bank’s projections at near its potential growth rate.

The central bank also reiterated it is monitoring the economy’s “reaction” to higher interest rates — a key concern that Poloz has been flagging for a while given the country’s high debt levels and seen as a reason to remain cautious.

The Bank of Canada also commented on recent “financial” stresses in emerging markets, but said those are expected to have “limited spillovers”.

–With assistance from Erik Hertzberg.