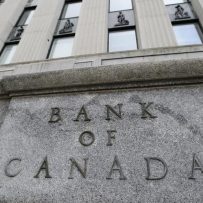 Canada’s central bank made yet another unscheduled rate cut Friday to bring its key interest target down to a crisis-level low, and the federal government upped its financial lifeline to businesses in a two-pronged effort to further combat the economic shock from COVID-19.

It was the double shock from the novel coronavirus and a sharp drop in oil prices that spurred the Bank of Canada’s surprise announcement — its second unscheduled cut this month and third overall this month — to lower its rate by half a percentage point to 0.25 per cent after it started the month at 1.75 per cent.

The interest rate cut takes the key rate to what the central bank referred to as “its effective lower bound” or the lowest level that rates can be set, although they alone may not spur economic activity because workers are being asked to stay home.

Governor Stephen Poloz said there are still tools left in the central bank’s kit, but it was trying to do everything it can right now to deal with deep economic shock.

“A firefighter has never been criticized for using too much water,” Poloz said.

“We want to make sure that we’ve got a great market function and indeed that the economy has a great foundation for growth when activity resumes.”

Not long after Poloz spoke, the federal government announced it was upping its proposed wage subsidy for businesses to 75 per cent. A broad swath of business and labour groups had criticized the original proposal of a 10 per cent subsidy for falling well short of what was needed to avoid mass layoffs.

The Liberals said they are also working with banks to provide loans of up to $40,000 for small businesses. They will be interest-free for the first year and up to $10,000 could be waived for repayment.

Speaking outside his Ottawa residence, Prime Minister Justin Trudeau said the government needs to hammer out the details of the proposal, which he hoped to provide by Monday.

Asked about paying for the measures, the prime minister said the government’s economic foundations were strong before the pandemic and he expressed confidence the economy will bounce back after COVID-19 passes.

Parliament’s budget watchdog said in its own report Friday that the federal government does have the room to spend more, particularly with rates as low as they are.

The report from budget officer Yves Giroux, which paints one possible scenario for the Canadian economy from a six-month downturn, suggested the federal deficit for the coming fiscal year could be $112.7 billion — a jump of $89.5 billion from previous forecasts as government spending climbs to combat the economic fallout from COVID-19.

But that number doesn’t include extra spending the Liberals announced this week to provide a $2,000-a-month benefit, for up to four months, to Canadians whose income dries up due to COVID-19. Nor does it include the money the Liberals will now spend on the increased wage subsidy.

An RBC report earlier this week suggested that a $200-billion deficit may not be out of the real of possibility, depending on the depth and duration of the downturn.

Trudeau didn’t detail the timeline the Liberals were exploring, but said federal financial aid was aimed at bridging the economic gap over the next few months.

One will aim to alleviate strains in short-term funding markets, while the other will see the central bank begin acquiring federal government securities in the secondary market with a minimum of $5 billion per week.