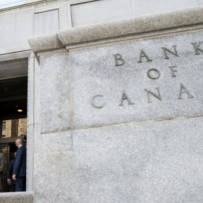 Policy makers in Ottawa left their benchmark overnight rate unchanged at 1.75 per cent for a fourth straight decision Wednesday, and dropped a reference to future increases that had been in every rate statement since the end of 2017.

While Poloz had been reluctant to fully discard the idea that his next step is likely higher — making him a bit of an outlier — Wednesday’s changes indicate policy makers now expect interest rates to remain on hold indefinitely as the economy copes with a series of headwinds that the central bank believes brought Canada’s economy to a near halt over the past six months.

“Governing Council judges that an accommodative policy interest rate continues to be warranted,” officials led by Governor Stephen Poloz said in the statement. “We will continue to evaluate the appropriate degree of monetary policy accommodation as new data arrive.”

The bank cited a series of factors — everything from slower global growth to sluggish housing and oil sectors — for the weaker outlook, which includes a more dour growth forecast for this year than economists are expecting.

Markets were largely anticipating the change in stance, pricing in no chance of any more hikes this year while placing some odds on a rate cut. The odds of a cut at the September meeting were at 30 per cent after the announcement, according to trading in the swaps market, with a more than 90 per cent chance of a reduction over the next 12 months.

“The statement tilted dovish, but anything else would have been a disappointment relative to the reality of the data,” Toronto-Dominion Bank Chief Economist  Beata Caranci said. They can’t “ignore the fact that the data has disappointed for several quarters.”

The loonie weakened and bond yields fell on the shift in bias. The Canadian currency dropped 0.5 per cent to $1.3488 per U.S. dollar, the lowest since Jan. 3. One dollar buys 74 U.S. cents. The yield on Canada’s two-year note, the most sensitive to Bank of Canada moves, dropped 5 basis points to 1.52 per cent at 12:52 p.m. in Toronto.

Yet even with the more dovish tilt and growth revisions, officials seem to be trying not to entrench market bets on lower borrowing costs. The Bank of Canada stuck to its expectations of a rebound from the current soft patch, and predicted the extra slack created by the slowdown will eventually be absorbed. It also characterized rates as accommodative, which suggests at least theoretically they remain below what would be the case if the economy faced no headwinds.

At a press conference after the decision, Poloz also indicated he believed a hike is more likely than a cut.

“The data from here will tell us what to do, but if our forecast is right, which I firmly believe it is, what that means is interest rates are more likely to go up than down,” Poloz said, adding the current policy rate is “appropriate” and “consistent” with the Bank of Canada’s economic outlook.

Emboldening rate-cut bets, however, may be a technical tweak by the Bank of Canada to revise down its estimate for the neutral rate by one quarter of a percentage point, to between 2.25 per cent and 3.25 per cent.

The neutral rate is the central bank’s best guess of the final resting place for borrowing costs when there are no headwinds, effectively a potential cap on how high rates could eventually go. The revision suggests current policy has been providing less stimulus to the economy than previously assumed.

Still, the basic narrative is that while Canada is in a period of slower-than-expected growth, officials continue to see many of the factors — trade conflicts, adjustments in both the housing market and the oil industry — as temporary.

The energy sector has been grappling with the impact of low oil prices and pipeline constraints, while the global economic slowdown and continued trade tensions are weighing on investment and exports outside of the oil sector, the Bank of Canada said. Housing activity and consumption have also been weaker than expected.

As a result, the central bank revised down its estimates for growth this year to 1.2 per cent, from 1.7 per cent in its January forecasts, including a projection of hardly any growth during the first three months of 2019. That’s below economist expectations for growth of about 1.5 per cent on the year.

Policy makers did, however, keep their estimate for 2.1 per cent growth in 2020 and projected a 2 per cent rate in 2021 as housing stabilizes, and investment and exports recover.

“Global economic activity is expected to pick up during 2019,” they said, “supported by accommodative financial conditions and as a number of temporary factors weighing on growth fade.”

The Bank of Canada also reduced slightly its estimates of how quickly the economy can grow without fueling inflation, what they call potential growth. That means weaker growth over the past six months isn’t expected to increase slack as much as it would otherwise.

In the central bank’s evaluation of the appropriate degree of monetary policy, it said “we are monitoring developments in household spending, oil markets, and global trade policy to gauge the extent to which the factors weighing on growth and the inflation outlook are dissipating.”

Consumer-price inflation is expected to remain close to the Bank of Canada’s 2 per cent target throughout the projection period.

Officials also singled out the recent Ontario budget for adding another drag on growth, prompting the central bank to revise down its estimates for government spending.