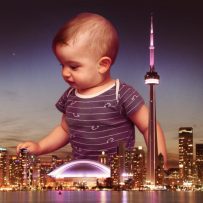 Strollers aren’t just a common site in the suburbs where single-family houses abound. A growing amount of Toronto residents aren’t buying into the backyard-and-bungalow lifestyle that’s far away from the city centre. In fact, a number of the city’s most vertical neighbourhoods – the Waterfront, the Bay Street Corridor, Willowdale West – are seeing a baby boom.

It’s no secret that the waterfront and neighbourhooods along the Yonge-University subway line are seeing a significant population increase as more people move into the new condos. The Waterfront Communities – The Island, an area of Toronto that includes the Entertainment District, St. Lawrence Market, the Distillery District and City Place, had a population of 26,025 residents in 2008 according to City of Toronto data. By 2011, that number ballooned to 43,365, a 66.63 per cent surge.

While the neighbourhood may call to mind single city dwellers, the number of children in the area has increased at a similar rate. In 2008, there were 805 kids aged 0 to 4-years old, an amount that rose 60.25 per cent in 2011.

Out of the 140 neighbourhoods studied by the City of Toronto, the Waterfront neighbourhood’s baby boom was second only to the Danforth, which saw an 81.43 per cent increase of the four and under set. The actual numbers, however, were much smaller compared to the Waterfront, with the baby population rising from 350 to 635 in three years.

That surge in the daycare crowd was seen in a number of downtown neighbourhoods. The Bay Street Corridor, which calls to mind career-obsessed singles hell bent on getting ahead in business, actually saw a boost in wee children. In three years, the amount of 0 to 4-year olds increased at a rate of 32.5 per cent, while the general population of the neighbourhood rose by 26.27 per cent. 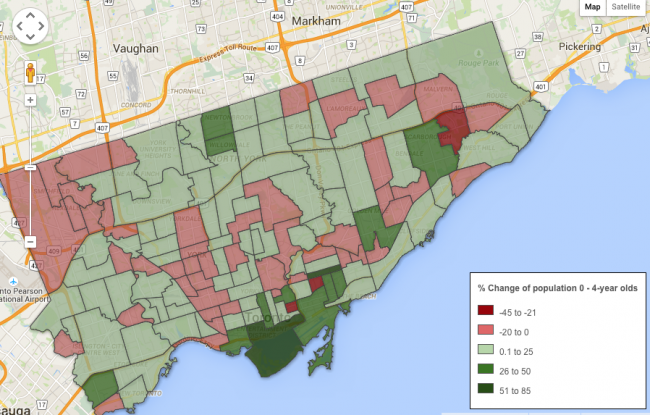 “The condo lifestyle with kids is brilliant,” said Erica Smith, the Broker of Record at Stomp Realty Inc, and one of the key members of Condo Chicks, a group of realtors specializing in condos and lofts.

Smith should know. She and her husband are raising a 2-year old and 1-year old in a two-bedroom condo in the St. Lawrence Market. It’s a lifestyle she recommends to many of her clients starting families.

Condos are typically turn-key, which can help if you’re pressed for time and chasing toddlers: there’s no snow to shovel or lawn to mow. Gridlock in the city has made downtown living more attractive to many home hunters, including those starting families and unwilling to give up family time to long commutes between the suburbs and their job in the city.

Since many suites are all one level, getting junior ready for his walk or seeing to his cries in middle of the night are all the easier without stairs.

“When I’m working with clients and they want to start looking at townhomes, I always tell them not to do it because they have no idea how it’s going to be, taking that stroller up the stairs. In a lot of townhouses you have to walk upstairs just to get into the entrance and that’s not even taking into account all the stairs in these layouts,” she said.

“They are very narrow layouts so sometimes you have three or four cases of stairs. Imagine you have the baby nursery on the third floor and the kitchen down on the main floor. You have to go up two sets of stairs just to get the baby a bottle in the middle of night.”

“When I’m working with clients and they want to start looking at townhomes, I always tell them not to do it because they have no idea how it’s going to be, taking that stroller up the stairs.”

Another perk for the condo-dwelling families? Because so many towers feature a drug store or grocery store at street level, rushing out to buy formula or diapers can be just an elevator ride away.

A rendering of the kid’s playroom at Garrison Point.

Developers are also slowly starting to cater to young families in condos. Garrison Point, a condo and townhouse project under construction in Liberty Village, will have a kid’s play room included in the amenities and there’s even talk of the master-planned development getting a private daycare and school.

Smith said that most of her clients who look for condos to raise their kids are seeking one bedroom plus den or two bedroom units. Some parts of the downtown are even seeing an increase in three-bedroom condos. The Entertainment District, known for its nightlife, ironically has a growing amount of family friendly suites. According to BuzzBuzzHome’s market snapshot tool, of the 1,675 new condo units on the market in the neighbourhood, 16.35 per cent have three bedrooms or more and 23.92 per cent are two bedroom suites.

But what happens when a couple’s baby gets to big for the den? Or the suite starts to feel too small for two school-aged kids? Interestingly, the population of 5 to 9-year olds in the Waterfront Communities rose by 3.7 per cent between 2008 and 2011, a significantly smaller rise than the baby boom.

Even Smith, who is happy raising kids downtown now, is considering moving to a house further west in order to be closer to family to make child care easier. There’s also the issue of schools, which can be a big motivating factor for parents.

“I think after four or five years people might move. The one big reason is if there’s a certain school they want to get into where they have to live in a certain area,” she said.

In order to deal with the swell of new residents with children, the city recently announced new plans for a new split public/Catholic school in a downtown tower in City Place that will also feature a community centre and daycare.

This may be a sign of things to come. As prices for houses continue to climb, condos may become even more common for new parents and the city and developers will have to find new ways of accommodating the shift.