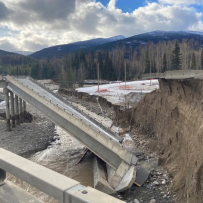 Extreme rains that have caused mudslides, floods and devastation in British Columbia and damaged road and rail links connecting Vancouver’s port to the rest of Canada, could take a toll on the country’s economic growth, according to analysts.
The flooding in the Fraser Valley area could rank among the costliest natural disasters in Canada’s history, both in terms of the bill to repair the damage and the broader costs to the country’s economy, as containers laden with imports sit on anchored ships and shipyards at the Port of Vancouver, which is now cut off from the rest of the country, according to an economist.
“Thinking about this from a provincial and federal perspective, this is an absolutely massive disruption and there are going to be costs in terms of both construction and lost economic activity because of the hindrance on international trade,” said Kent Fellows, an economist with the University of Calgary School of Public Policy. The extent of the economic impact will depend on how quickly the Canadian Pacific Railway Ltd and The Canadian National Railway Ltd lines connecting Vancouver to the rest of the country can be repaired, he said.
Entire cities and towns, including the 7,000-person city of Merritt, B.C., have been evacuated. Railway lines and major roads such as the Coquihalla Highway have sustained critical damage. People are stranded on highways and in towns like Hope, B.C. Tens of thousands of cows and chickens are at risk of drowning near Abbotsford, where flooding in the Sumas Prairie has hammered a key agricultural area. As authorities confirmed the death of one person, B.C. Premier John Horgan declared a state of emergency and imposed other measures to ensure essential goods and medical and emergency services were able to reach affected communities.

“There have already been really dramatic and heartbreaking community level costs — you’ve got municipalities that have been hit really, really hard,” Fellows said.

The Port of Vancouver is the busiest port in Canada, moving $550 million worth of cargo each day. The port did not respond to a request for comment on whether goods were able to move out of the region.

Based on the latest data for 2017 and extrapolated forward, “I estimate roughly $300-350m is traded between BC and the rest of Canada per day by road or rail. That’s $2-2.5b per week,” Trevor Tombe, an economics professor at the University of Calgary, wrote on Twitter. “Not to mention vastly larger direct damages. This is massive.”

Goods arriving in Canada to be sold ahead of Christmas and staples such as food supplies will likely be stuck on ships and delayed in reaching store shelves.

“You’ve got product that is sitting in Vancouver harbour that can’t get out of Vancouver. It’s too late to redirect those ships to another port… and there’s nothing on the western seaboard that has capacity anyways,” said Michael Graydon, CEO of Food, Health and Consumer Products of Canada.

“There are ships sitting in the harbour that they can’t unload and now they can’t even get the product, once it’s unloaded, out of Vancouver. And that’ll probably take, I would think, about another week until the flow starts to get back to a little bit more normal,” Graydon said.

Canada’s mining companies, agricultural producers and commodities exporters also see delays in shipping their goods overseas, or will be forced to ship through the U.S.

Teck Resources Ltd, a copper and coal miner, said in a statement that it was diverting trains from Vancouver to a Prince Rupert terminal. Canpotex Ltd, the potash export company owned by Nutrien Ltd and Mosaic Co, will ship more of the crop nutrient through its smaller terminals in Portland, Oregon. and Saint John, New Brunswick, spokesperson Natashia Stinka said.

The Port of Vancouver is the “dominant” import port for goods coming into Canada, said Trevor Heaver, professor at the University of British Columbia’s Sauder School of Business.

“There’s going to be more shortage than had already been expected,” Heaver said of the flow of goods into Canada as a result of the port being cut off from the rest of the country, adding the damage to roads and railway lines into Vancouver will add to congestion at the port and cause further delays transporting goods.

“Just about all commodities to some extent flow through that,” he said.

Both the country’s major railways said they had suffered damages as a result of the flooding but did not provide a timeframe for when the lines would be completely repaired.

“Crews continue to perform critical repair work following the mud slides and washout that interrupted the movement of railway traffic through southern B.C.,” CN Rail spokesperson Mathieu Gaudreault said in an email. “Northbound and eastbound traffic from Vancouver, as well as inbound traffic to Vancouver from east/north of Kamloops are still impacted by the situation. Crews are working as quickly as they safely can.”

CP Rail has deployed crews and equipment to the region and its engineering teams are working to repair damage to the company’s railway lines “as quickly as possible where safe to do so,” spokesperson Salem Woodrow said in an email to the Financial Post, adding there is no time estimate for when service will resume.

Woodrow said there are “multiple track outages” between Spences Bridge, that bisects the TransCanada Highway, and Falls Creek, B.C. “CP is working closely with authorities, including the Ministry of Transportation and Infrastructure, in our response to the situation,” Woodrow said.

The head of Canada’s largest grocery chain also warned Wednesday the flooding in B.C. could further stress supply chains in the country.

“We’ll have to see, given what’s happened in British Columbia with weather over the last couple of days, whether that has any kind of incremental disruption. We suspect it will, but only for a limited time,” Galen Weston, president of Loblaw Companies Ltd., said on an earnings call.

Weston said ports in western Canada and the northwestern U.S. have kept Canada from experiencing the worst of the supply chain crunch the U.S. has experienced

“Those northwestern ports have, over the last number of months, been performing substantially better than the southwestern ports. And so, the Canadian offshore supply chain has not been as disrupted as it has, perhaps, in the U.S.,” Weston said.

If the problem persists another week, there is potential for another crisis in the form of a fuel shortage. The Trans Mountain pipeline system, which supplies 300,000 barrels of oil per day to the Vancouver region, shut down four days ago during the extreme weather.

Trans Mountain said in a statement Wednesday that it had conducted an aerial survey of the affected areas and more on-the-ground analysis is needed “to determine if there is work required to repair or re-establish protective cover where the pipe has been exposed due to flooding.”

“Now we’re getting to potentially a little bit more of a critical time period,” said Patrick De Haan, head of petroleum analysis with GasBuddy in Chicago, noting that a four-day shutdown of the Trans Mountain pipeline isn’t showing up in fuel prices yet, possibly because drivers are staying home as a result of the road closures.

“If we go beyond maybe six or seven days, we could be seeing more of an impact,” De Haan said.

Meanwhile, natural gas prices at the Northwest Sumas hub at the Washington-British Columbia border jumped about 38 per cent to their highest since late October after Enbridge Inc. reduced flows on its Westcoast pipeline due to flooding . That was the biggest daily percentage gain at Sumas since the February freeze left millions without power in Texas.

The massive wildfires in Fort McMurray, Alta., in 2016 is widely considered to be the costliest natural disaster in Canada, with estimated insurance loss of $3.58 billion. Earlier this year, some B.C. towns were devastated by wildfires that led to insurance damages of $78 million, according to the Insurance Bureau of Canada.