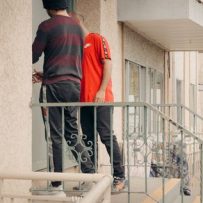 With the help of developers, non-profit groups are finding a way to put the untold number of empty apartment units across the region to far better use.

There are rental buildings that are partially vacant as they await redevelopment. Tenants are notified that eviction is pending, and so they often vacate early. These units can sit empty for months, even years.

Since October, Concert Properties has been renting some of their empty units to refugee claimants at the below-market rates set by B.C. Housing. The refugees, who have fled danger or persecution, live in the furnished units for three to seven months, until they find permanent accommodation.

Concert Properties has signed a licensing agreement with non-profit group Journey Home, which has been helping refugee claimant families since 2005. Each year, the organization helps hundreds of refugees who are in the process of claiming asylum in Canada. They are working with Immigrant Services Society of B.C. and the Vancouver Foundation on a new program called Meanwhile Spaces, utilizing vacant residential units to house refugees. The organization says that about 1,000 refugee claimants have arrived so far this year in B.C., and about half of those people have needed housing. More are on their way, so the demand is high.

Typically, development and building permits take at least a year to obtain. A rezoning application can take years for approval.

With all the redevelopment under way in Metro Vancouver, it makes sense that units sitting empty waiting for the slow permit process grind on should go toward the effort. But aid organizations say they need other developers to step up.

Concert Properties is asking other developers to join the program and rent out units in their buildings as they wait for permits. They hope the program puts space in underutilized buildings to good use. The developer is able to give back to the community, but they also benefit by acquiring a tiny revenue stream while maintaining tenants in buildings that might otherwise fall derelict.

“Our understanding is we are the only developer in Metro Vancouver that has adopted this program with Journey Home,” said Andrew Tong, Concert’s chief investment officer and managing director, CREC Commercial Fund LP.

“We think that it’s a huge opportunity for other developers to take part in this. Really, there is not a lot of risk to them. Why wouldn’t they take advantage of this great program where a lot is taken care of by Journey Home?

“We think there is an opportunity that is being missed, that more developers should take advantage of.”

Concert Properties, which began in 1989 as a public-private pension fund venture, is one of Canada’s biggest rental housing developers. Its multiphased Collingwood Village began in 1994, next to Joyce-Collingwood SkyTrain station. It also developed the well-known six-acre condominium complex Arbutus Walk in Kitsilano. Today, the real estate company is owned by 19 union and management pension plans, with major commercial and residential projects in B.C. and Ontario. Of the 4,200 rental units Concert has built, 1,100 of them have restricted rents through partnerships with the City of Vancouver, B.C. Housing, and Canada Mortgage and Housing Corporation, according to Mr. Tong.

The company has several major projects under way, including 308 rental homes in Coquitlam that will deliver 100 units of affordable and deeply affordable housing.

The developer recently renewed its partnership agreement with Journey Home, a non-profit that helps place refugees in temporary homes until they find permanent accommodation. Journey Home collects rents from families who have found work and are able to pay, or it covers their rents for them until they qualify for income assistance. The non-profit then pays the rents to the developer, which maintains the units. Concert Properties’ units are all two-bedroom, Mr. Tong said, and the rates are based on B.C. Housing guidelines for family size. For example, a single parent with two children pays $860. The market rate for that same space would be $1,450 to $1,600, Mr. Tong said.

So far, Concert Properties have placed nine refugee families since partnering with Journey Home, and will continue to house refugees until the end of September. The units are in a multibuilding complex, with about 200 apartments, and the majority of units are being rented at market rents. For the refugees, it’s a welcome alternative to a hotel or shelter.

But Concert Properties is not new to the process. In 2016, the company found empty units for 21 Syrian refugees in the same set of buildings that they are now using again. Prior to that, developer Westbank also offered up a 12-unit building in the West End for Syrian refugees. The building was sitting empty and scheduled for demolition.

For the safety of the refugees, the location of the buildings cannot be disclosed.

Not everyone understands that refugees are people who are often highly educated and have arrived with little money. They are looking to find jobs and settle down.

“People might have a biased or negative view of what refugees are like,” Mr. Tong said. “Journey Home has to often step in and let landlords know how good a tenant they could be. Our experience has been that they are fabulous.”

Mr. Tong couldn’t estimate the potential number of empty units, but said that’s part of the reason for his call to action for other developers – or average homeowners.

“It could be a single-family homeowner, planning to rebuild their home, but in the meantime they don’t know what to do with it. I don’t know what the scale could be, but certainly there is a need, and we think the real estate industry, and those who own real estate who plan to redevelop, can play an important part in these people’s journey in finding permanent housing.”

Another developer has also stepped up by providing refugee housing, and they say they are interested in working with more non-profits, including Journey Home.

Developer Wesgroup Properties, which has about 800 rental units in its portfolio, has an old apartment building of one- and two-bedroom units awaiting redevelopment in Burnaby. Since October, an Afghan family of six has been living in one of the units at a rate of $10 a month (they had to charge something for tax purposes). Because the unit needed maintenance, the company did repairs and added new appliances, and guaranteed the unit for 12 months.

Canadian Memorial United Church had approached the developer to find housing for the family, who’d gone through a lot to get to Canada.

Ms. Liu said that there are “a ton” of empty units in the Lower Mainland and beyond that could go toward short-term housing. As well, it’s an opportunity to rent suites that don’t make sense for long-term tenants.

“It makes perfect sense with these upcoming redevelopments and us not knowing the timeline,” Ms. Liu said.

“We have a lot more rental in our pipeline under construction. … And because typically developers are spending quite a bit of time waiting, when the development application sign goes up, these suites become difficult to rent.”

Mr. Tong can’t think of many reasons why a developer wouldn’t jump at the opportunity.

“The only thing that I could see is if the landlord really wanted to maximize their revenue in every way, they may not want to participate. But I don’t buy that. The opportunity to actually help from a social standpoint is far more important than the minor incremental value you can get from that revenue for that short-term period. The other thing to recognize is we could play a part in people’s lives. So that alone should motivate landlords right across to really consider programs like this.”

He says that large housing developers should consider such short-term housing as part of a continuum of housing types.

“If you’re going to be in the housing business, you have to look at all types of housing. You have to provide a variety of diverse housing if you want to be a long-term housing provider in your region.”

As well, Journey Home vets landlords and developers to make sure they’re suitable for the program.

Journey Home’s executive director, Brad Kinnie, says the program is based on a similar U.K. program, and the results so far are promising. Most of the families who have gone through the program so far have found work and found market-rate rental housing. They needed about six months to get stabilized, Mr. Kinnie said.

“Concert was our first trial … we are trying to prove the concept first. We need to build capacity to do it on a larger scale,” Mr. Kinnie said.

“We would love to talk to other developers and see this continue. … Developers do well in our city so they get to give back and help with this really good social cause. The win-win is important here.”