Average Toronto condo rent creeps past $2,000 for the first time 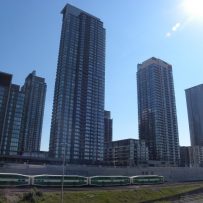 Toronto renters and homebuyers in the city have at least one thing in common: both groups are facing blistering markets that have never been so expensive.

This is a 9-per-cent surge — another record — from that same period a year ago, according to Urbanation data going back to 2011.

Based on multiple listing service system records, renters signed leases for 7,651 condo units during this time, a 9-per-cent drop from a year ago, when a new record was set.

It wasn’t for lack of demand, Urbanation suggests. Instead, a pullback in listings is to blame, as there were 30 per cent fewer units available in new projects this quarter, compared to one year earlier.

If a landlord put their condo up for rent in the third quarter, it took just 12 days for them to find a tenant.

Looking at only Toronto proper, the average rent for a condo surpassed the $2,000 mark, a first.

The average-sized Toronto condo rental was 717 square feet, and based on the average per-square-foot price of $2.85, it would cost $2,044 to rent.

As for purpose-built rentals, which are buildings developed for the purpose of renting, not owning, the average rent was $2.45 per square foot, up 5 per cent. The vacancy rate for the GTA was a drum tight 0.6 per cent in Q3.

Urbanation’s survey of apartments only includes GTA projects completed from 2005 and on. Since that year, contractors finished 46 buildings housing 8,293 units.

“The rental market has become severely undersupplied, which is likely to worsen following the latest round of mortgage insurance rule changes,” says Shaun Hildebrand, senior vice president of Urbanation.

“Notably, higher qualification standards for first-time buyers and reduced credit availability for investors should put even more pressure on the market, even as more rental units are being built,” he adds.

In the third quarter of this year, 25 purpose-built rental buildings were under construction, with a total of 5,678 units between them, down 676 units from a quarter earlier as renters began moving into four buildings.

Further down the pipeline, there are 20,226 proposed rental units, twice what was recorded in 2015’s third quarter.