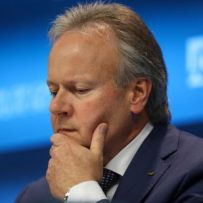 Bank of Canada Governor Stephen Poloz will have to be extra careful with the words he chooses when he reveals the central bank’s rate decision tomorrow.

Markets are anticipating that Poloz will join other central banks in cutting interest rates as early as October, but Bay Street will no doubt be analyzing the bank governor’s statement carefully next week for hints on when and how many times he could pull the trigger.

A recent escalation in the U.S.-China trade war and a trend of easing monetary policy around the world have tipped the scales in Canada from anticipating rate hikes in the future to seeing lower interest rates on the horizon.

The Canadian economy, which had been on relatively solid footing, is also now showing signs of weakness.

The latest second-quarter GDP report looked strong on the surface as a jump in exports drove a 3.7 per cent annualized expansion. But the finer details showed domestic demand is wavering, with a significant decline in business investment and slower consumer spending.

“Based on the latest developments, I think the Bank [of Canada] is going to have to end up cutting its latest forecasts, perhaps only marginally,” Stephen Brown, senior Canada economist at Capital Economics, told BNN Bloomberg in an Aug. 27 broadcast interview.

“I think there are signs the global manufacturing downturn is spreading to Canada, so we’ve had the surveys here weaken. We’ve seen manufacturing GDP is likely to drop by about one per cent in June, and then we’ve also seen signs of slower investment growth in the import data,” he added.

“I don’t think the bank can ignore that … Because if you’ve got a negative outlook for exports, business investment and perhaps residential investment … it’s only so long before consumer spending growth comes back down again.”

Meanwhile, CIBC Capital Markets has a less drastic forecast for rate cuts – predicting a quarter-point reduction in the first quarter of next year.

“The Bank of Canada can pat itself on the back for not having hiked rates as far as the Fed, and therefore needn’t be in as much of a hurry to ease in the face of an evident souring in the global backdrop,” Avery Shenfeld, managing director and chief economist at CIBC Capital Markets, said in an email.

“The September statement could therefore have an ‘on the one hand, on the other hand’ tone, likely noting some pleasant surprises in second-quarter data at home, on-target inflation, and the fact that interest rates are already fairly low, while acknowledging some fresh global headwinds,” Shenfeld said.

Brown says he’ll be focusing on one line in particular in the Bank of Canada’s September statement, which he believes will hold the key clue on future rate moves.

“The bank most recently in July said that ‘the degree of accommodation being provided by the current policy interest rate remains appropriate.’ If the bank wants to give a clear signal that it is intending to cut interest rates, it will change this line,” Brown said.

“That said, I’m not confident that they will actually change this.”

Investors shouldn’t be surprised though if the Bank of Canada delivers a rate cut next week, according to David Doyle, North America economist and Canadian markets strategist with Macquarie Group.

Doyle told BNN Bloomberg’s Amber Kanwar that September is very much a “live meeting,” considering the underlying softness in the domestic economy. He also added he expects two cuts before the end of the year for a total reduction of 50 basis points.

“The second quarter [GDP] figures were strong from a headline perspective, but if you look at the details, the headline was pretty much a mirage,” Doyle said Friday.