Are You Managing to Listen? 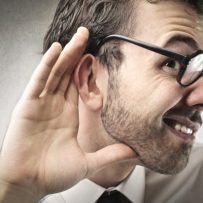 I remember it well from my childhood, and my wife, Stacey, tends to remind me. My blood boils a bit to this day when I hear it.

We are all guilty of selective hearing. That’s when we subconsciously tune out what someone is saying, maybe grab the key bits of the conversation and move on. Only later do you realize that you may have missed something that you probably should have absorbed. Or that you relayed incorrect information.

Before you lease, you’ve got to listen

Over the years while building a successful stable of clients in the newspaper printing business, I focused hard on listening. My boss at the time said you have to listen and understand what your client is saying before you can offer the right solution. That goes for any professional relationship, whether it be putting ink on paper or butts in apartment beds.

At June’s National Apartment Association Education Conference & Exposition in Denver, a portion of a session devoted to our friends in the maintenance side of the industry focused on communication, how to not only effectively communicate but also to, well, listen. Mark Vanderhoof of CWS Apartment Homes, LLC, hosted the segment and referenced French playwright Albert Guinon’s belief that the art of conversation lies in listening to help make his point.

I have to admit that I really didn’t fully grasp that part of the message, because I tend to tune out what 19th Century playwrights have to say. Brings up bad memories of history class.

But what got my attention were three exercises in verbal communication that Vanderhoof offered up for audience participation. I kind of slumped in my seat so I wouldn’t be noticed.

Three groups of about a dozen people each lined up like soldiers and were asked to pass along a message by whispering to the next person. The idea was to not only determine how well each listened but also to prove how a message that gets passed down the chain like a bad pair of underwear can get discombobulated.

The first group bombed. Big time. I’m sure there were some who accurately relayed “Banana Bandana Banned Anna from the bandana band.” Not sure what Anna did to get banned in this tongue-twister, but I can tell that the guy on the end had no clue what he was hearing. “Something about bananas,” he said when asked to repeat the message.

A more in-tune second group executed the next message – “Cabin Fever is contagious in many parts of the California Coast” – to near perfection. Everything came through loud and clear except that the person on the end forgot to repeat “California.” But that’s okay, because California tends to do its own thing anyway.

Group Three fared almost as well, coming close on “Storm surge is up soon to be over sixty feet or so,” but made one critical, factual error. According to these pseudo weather reporters, the storm surge was only “six feet or so high.” Don’t expect any of them to be in Situation Room on CNN during hurricane season.

Getting the message right results in better property management

There was one more phrase that Vanderhoof didn’t get to because of time: “Groovy gophers grip great big carrot sticks.” I shudder to think how that one might have come out.

The point is, that while we had a good chuckle from the results, the message can get distorted when delivered by word of mouth. Vanderhoof says write it down.

Imagine if you told your regional manager to verbally pass along a message to every site manager that each property needed to replace six toilets to start a water-conservation effort. And then you return to find that 10 times that amount had been installed. Okay, I know there may be accounting red flags that could go up, but what if? The Environmental Protection Agency (EPA) would throw you a party, but your investors might string you up.

Vanderhoof said one solution is simple, write the message down. But, I can tell you that just scribing something doesn’t always mean that you get the full meaning. You first have to listen. Breath deep, focus, stare ‘em in the eyes if you have to, do whatever it takes. Just listen and listen carefully.

Now, if you’ll excuse me, I think I’ll see what Guinon has to say about listening.