Are millennials better off renting? Why young Canadians may want to put off home ownership 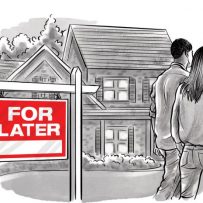 The U.S. Federal Reserve recently suggested that young Americans may be wise to delay the purchase of a home. Given Canada’s surging home prices, young Canadians should be even more inclined to consider the advice to put off home ownership.

In a report from the St. Louis Fed, titled “The Demographics of Wealth,” the authors raise concerns that buying a home too early is putting young families on a trajectory to be poorer than all previous generations. It was released earlier this year and is based on data collected from 40,000 households between 1989 and 2013.

Delaying home ownership is a solution that they put forth, suggesting that millennials “delay purchase of a home with its attendant debt burden until it (is) possible to buy a house that (does) not make the family’s balance sheet dangerously undiversified and highly leveraged.”

The U.S. real estate bubble burst in 2007, after a run-up that began in the early 1990s, around the same time as Canadian real estate started its current ascent. Many Americans who bought their first home 25 years ago are still feeling the pain today. On an inflation-adjusted basis, the net worth of U.S. families headed by someone aged 41-60 has fallen by about 1/3 if you compare 1989 families to those in 2013, meaning this generation of middle-aged Americans is less wealthy than the previous generation.

Given that homes cost more in Canada (averaging $453,560 nationally vs. approximately $311,619 in the U.S.) and household debt is higher here as well (Canada’s debt-to-income ratio is 1.63 versus 0.96 in the U.S.), Canadian millennials should pay close attention to the advice being doled out by the U.S. central bank.

In particular, the researchers are worried about young people putting what little savings they have into a home and having a mortgage so large they are unable to save in the future. This will be a big concern when interest rates rise in Canada and mortgage payments take a bigger chunk out of budgets, further limiting the ability to save.

Furthermore, an inability to accumulate non-real-estate assets means the net worth of young people is becoming increasingly undiversified. Being all-in on real estate leaves little opportunity to consider other asset classes, including stocks.