Another fire at 650 Parliament during re-occupancy procedures 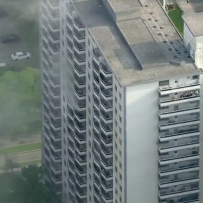 Investigators have determined the cause of the latest fire to break out at 650 Parliament Street.

The blaze began inside a 15th floor unit on Wednesday morning as crews were testing the building’s electrical system.

According to Toronto Fire Services, investigators have since determined that the fire was caused by the ignition of some combustible materials that were left on a stovetop burner inside the unit.

They say that the burner was left in the on position following the building’s evacuation for a massive six-alarm fire last August.

The material on the burner then caught fire on Wednesday morning during the re-energizing and testing of the electrical system by a third-party contractor, Toronto Fire Services says.

The fire was contained to the originating unit, however, crews previously said that the damage inside that unit was substantial.

Residents of 650 Parliament were initially told that they would be able to move back into their units in early 2019, however, the timeline for the return of residents has since been pushed back multiple times.

In the most recent update in March, the building management company told residents that they wouldn’t be able to return until the fall at the earliest.