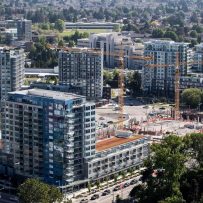 An increase in multi-unit projects such as condominiums, apartments and townhouses helped push the annual pace of housing starts in October higher, Canada Mortgage and Housing Corp. said Thursday.

The housing agency said the seasonally adjusted annual rate of housing starts last month came in at 205,925 units, up from 189,730 in September.

Economists had expected an annual rate of 200,000, according to Thomson Reuters Eikon.

CMHC said the six-month moving average of the monthly seasonally adjusted annual rates was 206,171 in October, down from 207,809 in September.

However, CIBC economist Royce Mendes noted the growth was due to the multiples component.

“The fact that headline starts rose on the month is still a positive for tracking estimates of the economy,” Mendes wrote.

“But given that it came on the back of an increase in multiples coupled with a drop in singles, means that the latest reading on starts may not prove sustainable. We still see the cocktail of tighter lending rules and higher interest rates as causing housing activity to become a drag on the economy come 2019.”

The growth in housing starts in October came as the annual pace of urban starts climbed by 8.6 per cent to 191,964 units.

Rural starts were estimated at a seasonally adjusted annual rate of 13,961 units.

Earlier this week, CMHC said it expected the real estate market to moderate over the next two years.

In its annual outlook, the agency forecasted housing starts and sales to both decline in 2019 and 2020.