AN OTTAWA LANDLORD REQUIRED COVID-19 VACCINATION FROM HIS RENTER. IS THAT ALLOWED? 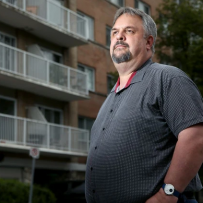 Sixteen days before he was supposed to move in to his new rental, Eric Foucault’s son got a text from his landlord asking about his COVID-19 vaccination status.
The Algonquin College student had viewed the place three weeks prior, a room in a basement he’d be living in with two other renters, with a kitchen, bathroom and some other common space shared between them. The landlord and his wife lived upstairs, with their own kitchen and bathroom and a different entrance. They would do some cleaning of the renters’ area, but the renters wouldn’t have access to the landlord’s living space.
On the day of the viewing, the landlord went over the house rules and a verbal agreement was reached. Foucault’s son paid a deposit, got a receipt from the landlord and was all set to move in Aug. 1. No mention was made of a COVID-19 vaccination requirement.Then came the July 16 inquiry. According to a screenshots shared with this newspaper, the student explained that he hadn’t yet received the vaccine and was still undecided about doing so.
“Sorry, it’s not going to work if you are not vaccinated,” the landlord replied. “I have to put the safety of my family first. Please come by and get your refund.”At a time when university campuses, festivals, and business operators have already announced COVID-19 vaccination requirements, and countless other entities are undoubtedly considering them, Foucault’s situation raises some big questions for people who rent — and rent out — homes.

Foucault doesn’t think his son’s would-have-been landlord was acting in line with the law, and says he came to this newspaper about the situation because he doesn’t want other students to go through the same thing. (This newspaper agreed to withhold his son’s name over concerns about potential backlash, including securing future housing).

“He’s a good kid, he doesn’t mean (any) harm by not getting his vaccine. He’s just undecided,” said Foucault. “And you know how many people in the world right now are just not ready to get it?”Whatever their reasons might be, some 17 per cent of Ottawa’s adult population has yet to receive any dose of COVID-19 vaccine, and 29 per cent are not fully vaccinated. And even for those with vaccine protection, there’s likely a sizeable portion who would prefer not disclose that medical information to a landlord.

So what if they’re told they have to, in order to secure a tenancy?

Among the lawyers this newspaper surveyed, there wasn’t a consistent opinion on legality in this scenario. At least one thought it probable that landlords can’t even ask for vaccination status.

Under Canadian privacy law (specifically, the Personal Information Protection and Electronic Documents Act), “a landlord needs to have a legitimate purpose for collecting personal information such as whether someone is vaccinated, and that purpose has to be what a ‘reasonable person would consider … appropriate in the circumstances’” said Ottawa landlord and tenant lawyer Ryan Deacon, quoting from PIPEDA.“I’m having a hard time coming up with a good reason to ask. Any purpose regarding taking appropriate measures against COVID-19 would fall flat. Landlords should be acting as if non-vaccinated people are using common areas, since tenants are allowed to have guests or occupants in their units.”

Others believed landlords are able to inquire about whether a prospective tenant is vaccinated. Among them was John Dickie, partner at Dickie & Lyman Lawyers LLP and chair of the Eastern Ontario Landlord Organization.

A landlord could even ask said tenant for proof, said Dickie, and decline to rent to them if they refused to answer or weren’t vaccinated. “Generally,” Dickie added, as a caveat.The room for exception, he went on to explain, comes thanks to the Ontario Human Rights Code, which prohibits actions that discriminate against people based on one or more “protected grounds” — age, ethnic origin, disability and others — in a number of areas, including housing.

According to Deacon, who represents both landlords and tenants, refusing to rent to an unvaccinated person could be what’s known as “constructive discrimination.” Some people can’t get a COVID-19 shot because of heath reasons (discrimination due to disability, in his eyes), while others, such as a recent refugee, might be unvaccinated because they haven’t had time to get a shot (and thus, there’s discrimination based on citizen status).

“A landlord does not have to intend to discriminate, it can simply be the knock-on effect of a policy,” said Deacon. “A classic example is an employer who requires all employees to work on Saturday without exception, which wouldn’t work for someone whose religion requires no work on that day.”The Ontario Human Rights Commission — essentially, the advocacy component of the provincial human rights system — said housing providers have to make accommodations for people who might not be able to get vaccinated for reasons such as disability “unless doing so would amount to an undue hardship based on cost or health and safety.”

The Commission also noted that the scope of the code’s protections, which could be engaged if potential tenants were able to show that a proof-of-vaccination requirement adversely affected them because of a protected ground, “would be dependent on all of the facts.”

The calculus around health and safety risks would likely change, they noted, for congregate and non-congregate housing, as well as shared personal residences.In fact, the code doesn’t apply if you have to share a bathroom or kitchen with the owner or owner’s family. Same goes for Ontario’s Residential Tenancies Act. And that’s a game-changer when it comes to implementing a vaccination requirement for existing tenants.

For RTA tenancies — which most traditional rental situations in Ontario would fall under — once a landlord and tenant have a tenancy agreement (written, oral or implied), the landlord can’t just decide they no longer want to rent to someone because they’re unvaccinated, explained Michael Thiele, a partner at Quinn Thiele Mineault Grodzki LLP.

“The policy underlying the Residential Tenancies Act is housing in perpetuity,” he said.

In other words: there’s no way a landlord can end your tenancy, unless it’s for one of the “for-cause” reasons in the RTA, or one of the few “no-fault” reasons.

The situation is different, though, if the rental arrangement isn’t covered by the RTA. If a homeowner was renting a room to someone who was required to share a kitchen or bathroom with them and who refused to get vaccinated, that landlord could usually end the rental if they wanted to, said Dickie.

It’s unclear whether the arrangement between Foucault’s son and his erstwhile landlord would be considered RTA-exempt. This newspaper spoke to the landlord, who declined to comment for this story but did say that he considered it a roommate situation, and there was shared kitchen area because they use the same laundry, which is located there.If a renter thinks they’re dealing with an RTA tenancy, but the landlord does not, Dickie said the renter can apply to the Landlord Tenant Board for the remedy they’re seeking, and the first issue considered will be whether the RTA applied to the tenancy. And the landlord, according to Thiele, would have the burden of proving the exemption.

In the world of RTA tenancies, lawyers interviewed could only identify one avenue through which landlords could (legally) require vaccination from current tenants. And none were particularly convinced it would work.

Theoretically, a landlord could try to use a N5 notice to end a tenancy for substantial interference with the landlord or another tenant’s reasonable enjoyment of the residential complex, or an N7 for seriously impairing the safety of another person in the residential complex.They’d face some difficult questions, trying to make this case.

If a tenant were to receive one of these hypothetical N5 or N7 notices, they don’t have to move out. The landlord could apply to the Landlord Tenant Board for an eviction order, and the board would schedule a hearing where the landlord would have to prove what they were claiming in the notice. The expected outcome?

“If I was guessing, there’s no way under the sun that the board is going to order tenants to be vaccinated,” said Thiele. “It would be earth-shattering.”