Alberta’s Recession Is Finally Over, With Little Help From Oil 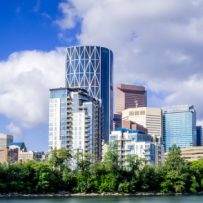 The oil industry still hasn’t returned to its role as a driver of growth.

ATB Financial has declared Alberta’s worst recession in three decades over with expected economic growth of 3.2 per cent this year.

The provincially-owned bank warns, however, that challenges remain, especially in the energy sector where oil prices have been stuck around the break-even price of US$50 a barrel.

ATB’s financial outlook says the low oil price has led to only modest increases in drilling activity and hiring, while overall the oil and gas sector has at best stabilized this year and not yet returned as a growth engine.

The bank says smaller sectors like agriculture, food processing, tourism, retail and manufacturing are all contributing to modest growth, creating some of the 35,000 jobs added over the past year in a more diversified economy.

But it says those sectors don’t pay as well as oil and gas and that the public sector has driven more job growth.

Overall, ATB says attitudes remain cautious and it will likely be a few years before the province sees a full economic recovery.