Alberta projects deficit drop of $1B in first-quarter update 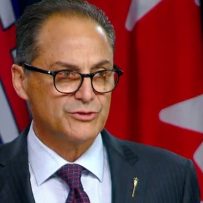 Joe Ceci says the province is relying on revenues not just from the Trans Mountain expansion but other pipeline projects as well, such as the Line 3 expansion from Alberta to Wisconsin and the Keystone XL line to the U.S. Gulf Coast.

“There are a number of assumptions, not just (Trans Mountain.) We have two other pipelines that are in play and will help us out in that path to balance,” Ceci said Friday after announcing numbers for the first quarter of this year’s budget.

A Federal Court of Appeal decision Thursday overturned the approval of construction permits for the Trans Mountain pipeline, from Alberta to the B.C. coast. The court cited a lack of consultation with Indigenous groups and said the regulator, the National Energy Board, failed to address the impact on marine traffic.

With a provincial election coming in the spring, Premier Rachel Notley’s government has tied its fortunes to the success of Trans Mountain as an example of the concrete benefit from its climate change plan, which includes a carbon tax on home heating fuels and gas at the pumps.

Notley called on Prime Minister Justin Trudeau’s government Thursday to take steps to get the project back on track by year’s end and said until that happens Alberta will not sign on to the federal climate change plan.

But it also means the province would forgo $1 billion in revenue by 2024 from that tax – money that has been factored into the blueprint to balance the books by that date.

The Trans Mountain project would double the existing pipeline to triple the amount of oil shipped to B.C., allowing producers to expand beyond existing U.S. customers to more lucrative markets on the Pacific Rim.

Alberta is set to take in $4.7 billion in non-renewable resource revenue this year but is banking on that number more than doubling to $10.4 billion by 2024.

“(The NDP) have tried to wish their way out of a huge deficit and debt and Albertans are going to end up paying the price,” said Kenney.

The province has been running multiblllion-dollar deficits as the province rebounds from a prolonged slump in oil prices.

“Jobs are ups, earnings are up, rigs drilling are up, exports are up, manufacturing shipments are up, and the deficit is down,” said Ceci. “Alberta’s economy is growing.”

Kenney said it’s a spending plan that can’t be sustained, noting that the debt is expected to hit $96 billion by 2023.

“Today’s quarterly update does nothing to change the fiscal train wreck of their budget,” he said.