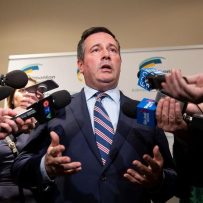 It’s only Day 4 and the Alberta election campaign has already settled into a grinding rhythm as deliberate and relentless as a pile-driver with no off switch.

The NDP has launched daily personal attacks against United Conservative leader Jason Kenney over his socially conservative background, a campaign Kenney has dubbed as “fear and smear” and part of “the politics of personal destruction.”

But it’s not as if Kenney is campaigning on sunshine and rainbows.

His rhetoric is at times filled with so much venom, Albertan voters should be issued with snake-bite kits.

Arguably, voters want to hear talk of hope and optimism. What they’re getting is an ice pick in the ear. They just might tune out rather than tune in.

For its part, the NDP risks alienating undecided voters who may have a hard time accepting such a negative campaign from the party of Rachel Notley who won the 2015 election with a message of optimism and cheerfulness.

This week she issued an Obama-esque vision for the future. “The politics of love, hope and optimism always trumps the politics of anger, division and fear,” she said.

But then immediately embraced a little bit of that anger, division and fear in her campaign kick-off speech Tuesday when she loudly referred to the controversy swirling around the 2017 UCP leadership race. “Two days ago we learned Mr. Kenney cheated to win his party’s leadership. And when he was caught, he didn’t tell the truth. Mr. Kenney looked Albertans in the eye and very casually and very comfortably lied to us, which in many ways goes to the heart of this issue: how comfortable Mr. Kenney is with lying.”

What happened in the UCP leadership race has now become something of a wildcard — and the NDP has seized on it as a winning hand. It certainly has the chattering classes excited. On Monday, after the NDP’s throne speech, journalists spent almost an hour grilling Kenney over what has been dubbed by his critics as a scandal.

Kenney denied any financial wrongdoing or that he unfairly colluded with another campaign candidate, Jeff Callaway, to defeat rival Brian Jean. The RCMP has been called in to investigate by Alberta’s election commissioner who has continued to levy fines against several people associated with the Callaway campaign.

And there’s the rub for the NDP. So far, the fingers have pointed at Callaway, not Kenney.

Thus, Kenney is trying to paint himself as the victim of NDP bullying.

However, Kenney is using overblown language of his own that is helping turn this campaign into a battle of the bullies.

When Kenney speaks, he doesn’t just blame, he hectors.

He blames “the catastrophic failure of the NDP” for destroying the Alberta economy. “This government is a complete failure, a failure on jobs, the economy, on pipelines and on standing up for Albertans.”

He refers to the province’s carbon tax as the “job killing carbon tax.” The economic downturn is an “NDP-led recession.” Even though Notley has criticized the federal government for not doing more to help Alberta, Kenney refers to the premier as “Trudeau’s good friend and ally.” She is soft on “left-wing special interests that are doing everything they can to landlocked our resources.”

He blames the NDP for helping to kill the Energy East pipeline proposal, for scuttling the Northern Gateway pipeline, and for somehow helping Barack Obama decide to give a thumbs down to the Keystone XL pipeline.

Kenney’s rhetoric is cynical, overblown and filled with enough questionable information to keep fact-checkers busy into the night. He gives little, if any, blame for the economic downturn to the real culprit: the price of oil. Kenney’s unofficial slogan: It’s the carbon tax, stupid.

But, if the public opinion polls are correct, his rhetoric is politically effective.

Albertans are frustrated with the federal government over pipelines, irritated with the NDP over the carbon tax and looking for someone to make things better.

Kenney is promising to force through a pipeline to the West Coast, change the Canadian equalization program and stop the federal carbon tax. He can’t do any of those things but he has taken a page out of the cynical playbook of former premier Ralph Klein who, among other things, threatened to go to court to fight the GST and stop same sex marriage. He didn’t do either but just promising to fight is good enough for the conservative base.

The NDP is also pointing fingers at UCP candidates. On the eve of the election call, the UCP’s star candidate in Calgary-Mountain View, Caylan Ford, abruptly resigned after comments she had made two years ago surfaced making it look like she sympathized with white supremacists. She angrily claimed the comments were taken out of context but resigned nonetheless.

It was a setback and put Kenney on the defensive. But it didn’t take long for him to get back on the offensive.

And that’s where we are now. Both sides on the offensive. Both managing to offend.

Both treating each other like nails — and themselves as hammers.