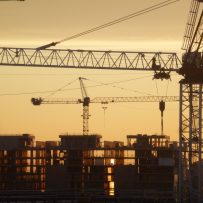 The total value of multi-family building permits decline 4.5 per cent in April over the previous month, with British Columbia and Alberta largely responsible for the dip. However, the value of permits was still up from March in Ontario and Quebec.

Canada-wide, construction intentions for residential buildings rose 1.2 per cent in April to $4.5 billion, the third month in a row to record an increase.

The residential sector couldn’t match the levels of growth seen in the non-residential sector, where the value of permits shot up 30.2 per cent to $3.3 billion in April. This comes on the tails of recent double-digit growth with the sector seeing a monthly gain of 24.8 per cent in March.

Most of the major municipalities saw an uptick in the value of building permits with 20 of the 34 census metropolitan areas studied by Statistics Canada seeing a boost. Toronto and Edmonton saw the biggest month-to-month increases with the former seeing a rise in the institutional buildings and multi-family dwellings while the latter saw gains for commercial buildings and, to a lesser extent, single-family dwellings.