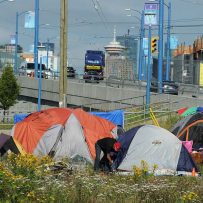 Metro Vancouver’s affordability crisis is driving up the number of homeless people in the region, and it’s getting worse for seniors and First Nations people, according to the latest homeless count.

The 2017 count found 992 people — or 45 per cent of the total homeless population — are homeless for the first time.

“We know affordable dwellings have declined within Metro Vancouver at an estimated rate of eight per cent per year since 2007,” said Mike Clay, chair of the Metro Vancouver Housing Committee. “Not only are we not getting enough units per year, but we have a catch-up that we have to do for the last 10 (years).”

Across Metro the number of homeless people jumped by 30 per cent to 3,605 people compared with 2014 — the highest to date since 2002 when the homeless counts started.

About half of the homeless who participated in the anonymous survey identified high rents and lack of income as the main barriers to housing. Addiction and mental illness were also factors, with 82 per cent of people dealing with at least one health condition.

“(Homelessness) is a huge burden of cost and conscience on our municipalities and communities,” said Clay. “We are very concerned we are failing to protect our most-vulnerable citizens, and the problem will not get better until we make some real changes.”

Vancouver, where Mayor Gregor Robertson had once pledged to eliminate homelessness by 2015, has 2,138 homeless, the highest in the region. Surrey is second with 602, followed by Langley at 206. In recent weeks the City of Vancouver has unveiled a new housing strategy setting new targets for housing based on income and affordability.

The growth in homelessness outside of the major urban centres of Vancouver and Surrey indicate suburban and rural communities are also under stress from a lack of housing and limited rental options, said Lorraine Copas, chair of the community advisory board for Metro.

“It’s hitting all parts of Metro Vancouver,” she said. “Vacancy rates are way lower in some of these communities. Choices aren’t great and people get pushed out.”

The count, which was conducted by 1,200 volunteers over a 24-hour period in March, found the majority of homeless people have lived in the municipality they were interviewed in for at least five years, debunking the commonly held belief that homeless people are flocking in from other provinces and municipalities.

Aboriginal people are vastly over-represented in homeless statistics, making up a third of the total homeless population though they account for only 2.5 per cent of the region’s population.

Youth aged 24 and under was the only age group where the count showed a decrease from 20 per cent in 2014 to 16 per cent this year.

Part of the overall increase in homeless numbers can be chalked up to better counting methods, said Clay.

In a bid to improve accuracy, this year Metro conducted a longer count in Surrey’s Newton area, counted the homeless living along waterways and worked with community partners to identify homeless camps.

In Port Moody, where he is mayor, Clay said there are people he now knows by name who weren’t counted in previous homeless surveys.

“Maybe that’s not great that we found a good way to count homeless people,” he said. “We wish we didn’t have to, but as long as we’re doing it, improving the accuracy is very important.”

The numbers are considered an under-count of the true number of homeless, which could be up to four times as high.

“To stem the tide, more affordable-housing options must be a top priority and local governments don’t have the resources to tackle that alone,” said Clay, who urged the federal and provincial governments to act quickly in the face of the worsening crisis.

The final report of the 2017 Homeless Count in Metro Vancouver can be found here.