A dorm with pub crawls, only fancier: co-living comes to Canada 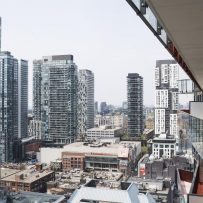 Canada is getting its first big taste of co-living rentals — the housing trend that’s spreading amid the global affordability crunch.

Dream Unlimited is developing a 24-storey tower in Ottawa that will have communal apartments alongside regular rentals.

The apartments — likely two or three bedrooms — will be fully furnished, come with cleaning services and share common areas such as kitchens. Monthly rents will start at about $1,225, about 30 per cent less than similar one-bedrooms in the area. Regular units in Dream’s building will start at about $2,065 per month.

“We’re doing a number of things where we are trying to provide affordable housing,” Michael Cooper, president of Toronto-based Dream, said by phone. “It’s a big issue.”

Common Living, which bills itself as the largest co-living operator in the U.S., will manage the building and offer perks such as rooftop yoga and comedy shows. The Ottawa building will be Common’s first foray outside of the U.S. It’s currently negotiating a pipeline of more than 500 bedrooms with developers in Toronto.

Another co-living firm, Node Living UK, also announced its first Canadian location on Monday, in tech hub Kitchener-Waterloo. London-based Node said it will provide housing for about 50 people in 38 apartments where rents will start at about $1,000 per month.

Communal living has been growing in Europe and the U.S., with firms like Germany’s Medici Living Group investing more than 1 billion euros to fuel expansion.

The living arrangements, which resemble upscale student residences, are gaining traction among mobile millennials who don’t want to accumulate belongings, can’t afford the soaring rents of many cities and like the instant communities they create.

The Ottawa tower, slated to be completed in 2022, is part of a 34-acre $1.8 billion project that Dream is developing in Canada’s capital, Cooper said. About 25 per cent of the tower will be communal units.

Cooper said it’s a win-win for renters and developers: cheaper for those who can’t cover the cost of an entire apartment, and more rent per square foot for property owners.