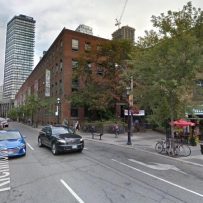 Last week at 401 Richmond in Downtown Toronto, a reception was held on the heritage building’s rooftop deck to celebrate new provincial legislation that will have the effect of protecting buildings like it from redevelopment in high demand areas in the city where recent assessments have meant steep increases in taxes.

The issue has been that Ontario assesses property tax rates based on the “highest and best use” of a site, not on what’s actually built on a site. That means that as nearby developments get larger, reassessments of older, smaller stock assumes that the property the existing building sits on is worth the same per square foot as the properties where much larger buildings now stand. This can mean massive increases in property tax, and in the case of 401 Richmond, all of the recent development in the Entertainment District has meant that it was facing a 130% property tax increase to be phased in over four years.

As a four-storey heritage warehouse building, converted to loft offices and galleries, and home to many arts and culture sector businesses, and several non-profits, the huge increase simply was not viable, and the closure and eventual redevelopment of 401 Richmond and other buildings like it would have become inevitable in the near future.

As an acknowledgement of everything that the type of organizations and the type of buildings represented by 401 Richmond give to the city in terms of vibrancy, innovation, and livability, then City Councillor Adam Vaughan raised the alarm bells at City Hall as the what was happening here, and then in this term Councillor Joe Cressy along with Councillor Josh Matlow introduced new regulation that would allow for a new property tax subclass aimed at giving such arts and culture hubs a tax break of 50 per cent. That motion made it through City Council in the first months of this year, but provincial action was required as well to make this legal.

In that regard, local MPP Han Dong was the point man driving the Province to allow this, ad he was the main speaker a yesterday’s reception, the Province having enacted the legislative amendment as the last act of the 41st parliament before the writ was posted for the provincial election, now underway. Dong’s remarks included that “Organizations like 401 Richmond have allowed the necessary space for artists, designers, creative thinkers and innovators to grow. These arts and culture centres provide a space for creative activity in our community, and the result is made-in-Toronto artwork. Here, the production by non-profits can be invested back into Toronto community organizations that are working to preserve the local environment.

“As of today, the final regulation has been posted that allows for the City of Toronto to provide a property tax reduction of up to 50% to facilities that offer affordable space for the non-profit and the cultural sector. The Province will provide a corresponding reduction to the education portion of the property tax. This important regulatory change will allow for community heritage and landmark sites such as 401 Richmond to continue to offer affordable space for arts and culture that is vital to the health of our communities. I believe we all have an important role to play in protecting these spaces for our city.”

Margie Zeidler, Dresden and Founder of 401 Richmond, was thrilled that the changes were achieved before the election. She remarked, “Han Dong and Joe Cressy heard the voices of our community, and their dedication and commitment to get this done showed us that they are friends of the arts and culture community.” 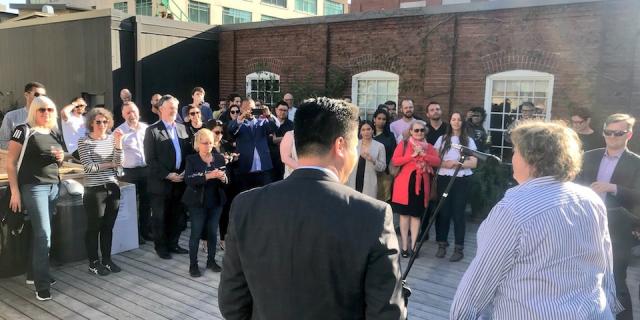 While Councillor Cressy is happy with what has happened, telling UrbanToronto that “this is already done in New York and other progressive cities”, he also declared that this is only the first step in reforming a flawed provincial property tax assessment system. While the new tax subclass will work for 401 Richmond and just over a dozen other buildings in the city—Tim Jones, CEO and President of Artscape, another organization which will benefit from the new tax subclass for a number of buildings it runs in Toronto, was also on hand to celebrate—other prized heritage commercial buildings of various sizes remain at risk of redevelopment unless they convert their tenants to similar arts and culture sector enterprises.

Cressy cited two examples of businesses still facing onerous tax increases owing to recent reassessments, one being Le Select Bistro on Wellington Street, the other being Remenyi House of Music on Bloor Street. Both are low-rise buildings now, but Le Select now faces being taxed as if an 11-storey building were on its site, while Remenyi faces taxes based on a 15-storey condo on its site. Cressy is determined that solutions will be found in the new Council term for such situations, and that a fundamental change to the way we do tax policy in Ontario needs to be addressed by the provincial parliament. 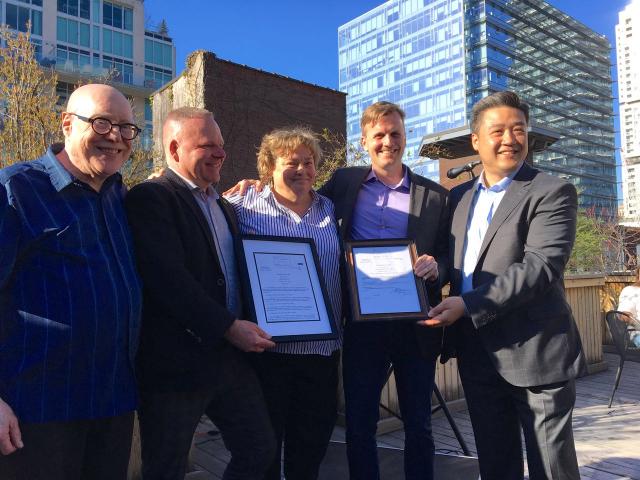 Murray Whyte, upon the City’s move to address the situation this winter, wrote in the Toronto Star in a February 13, 2018 column that “let’s not lose sight of the broader value of the gesture, however limited it may be. In approving the creative co-location subclass, the city is saying publicly that it’s willing to take at least some action against the forces of the open market. Or, put another way, that an Apple Store is not the tide that lifts all boats, and that having a mix of uses, people and purpose — regardless of their rent-paying ability — is at the core of the city in which we want to live.” His full story is worth the read.